Where have all the Sparrows gone? 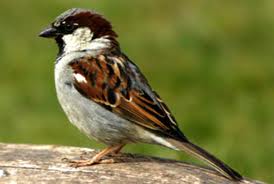 For a long, long time, the chubby, chirpy house sparrow lived in our midst aplenty. Now, you can't find them in the urban environment any more. All this has happened in a span of just a few years.

India is not the only place where the Sparrows have disappeared  from the cities.In the Netherlands, they are already an endangered species. In Britain, their population is dropping at such an alarming rate that they are now in the red list as a species of 'high conservation concern'.


In France, Germany, Italy, Belgium, the Czech Republic and Finland, the story is not very different.

This is an environmental alarm bell at its loudest.

House Sparrow (Passer domesticus) is a common bird that millenniums ago originated in the Mediterranean and came into Europe and Asia with the spread of agriculture. It was carried across the Atlantic in mid-19th century as a friend, to help clean up green inchworms from the trees of New York's Central Park.

It was the most widely distributed species of the world. Today it is suddenly disappearing in the urban environment. What this translates into is that the modern urbanization has reached a level where it can trigger the extinction of a species.

In the past, when the cities were small and there were villages around, with agricultural land around them, these were vast lungs of open spaces that separated the urban and the rural, constantly replenished the air.

In the fields there were occasional clusters of indigenous fruit trees and bushes that were ideal nesting places for a number of birds including sparrows. At such places, there was also a pond that got filled each year with the monsoon spillover from the entire region.

In the fields and the grazing lands there were thorny bushes and trees that provided safe nesting havens for sparrows and other small birds that kept the area clean of insects. The insects made ideal infant food for their young ones.

For the first 15 days of their life, house sparrow offsprings live entirely on these juicy morsels.

In those days, the crop was harvested and gathered at one place where the grain was separated from the chaff, giving ample time to the sparrow to take their share for their pest control services rendered to the farmer.

When the harvest moved to the open grain markets, the birds still had a chance to peck at it. Back in the household when women cleaned the grain in courtyards, sparrows were always a constant companion, feeding on the stray seeds of weeds that were separated and discarded.

As fields, bushes, tree clusters, marshes and the water bodies disappear, they are being replaced by urban dwellings, watertight pavements and roads. Naturally, only some habitants of the erstwhile eco-system are able to survive.

With no food or safe nesting, birds perish or migrate to more agreeable habitat.
In the absence of smaller birds that feed on them, insects such as maggots and flies thrive and carry disease to the human dwellings.

It is not the first time the house sparrows have been ousted from cities. In the early 20th century when Europe started shifting from horse-driven transport to motorised vehicles, the house sparrow population in many cities is said to have declined by two-third. The cause cited was the lack of cereal fed to the horses in the open -- a key food supply for birds.

Today the reasons for the sparrows' decline are largely electromagnetic radiation from mobile phones and lack of insect food due to excessive use of pesticide in urban gardens. But most certainly, it is the loss of habitat that drives any species towards extinction.

Our gardens and parks are hardly any habitat for birds. In an open canopy environment with broom cleaned floor, there is neither nesting material nor food or security from predators.

Can we not think of 'Mini Forests' within the urban set-up? These should have little ponds to collect the rain run off in small wetlands, where indigenous aquatic plants can grow and where water birds in small numbers can find sustenance.

The 'forests' should have fruit-bearing trees forming a low-rise canopy. There should be unchecked undergrowth to provide shelter to ground feeding birds and their insect prey. Here bird droppings and leaf litter should be the only manure.

Once such a system is established, there will be no need to water the 'forests'. It will be an ideal home for a host of birds and other forms of life. These 'forests' will demand nothing from us other than our absence. And, for all you know, the house sparrow may even stage a come back!
Posted by Praveen kumar at 2:56 AM