World Population Day observed across the World on 11 July 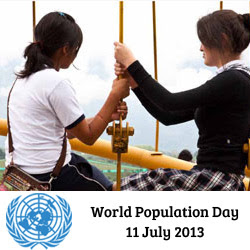 11 July: World Population Day World Population Day was observed on 11 July 2013 across the world. The theme for the year 2013 is ‘Focus is on Adolescent Pregnancy’. In 1989, in its decision 89/46, the Governing Council of the United Nations Development Programme (UNDP) declared 11 July as the day that should be observed as World Population Day by the International Community. The UNDP recommended 11 July as world Population Day, in order to focus attention on the urgency and importance of population issues in the context of overall development plans and programmes and the need to find solutions for these issues. The 2013 World Population Day is being observed with an aim of raising awareness on the issue of adolescent pregnancy with the hope of delivering a world where every pregnancy is wanted and every childbirth is safe, and every young person’s potential is fulfilled. The 2013 aim has been proposed because as per reports about 16 million of girls under 18 years of age give birth to a child every year. Apart from this about 3.2 million undergoes an unsafe abortion and about 90 percent of the pregnant adolescents in the developing world are married. In case of India, pregnancy among adolescent is a serious challenge, as the latest National Family Health Survey data reports that about 3.5 percent girls in India gets married before attaining age of 18 years. This problem gives rise to early child bearing tendency among girls. World and impacts of growing PopulationThe world population went up to 7 billion people in 2011 from 2.5 billion as recorded in 1950. The population growth had profound implications on development, as this growth in population is an opportunity as well as a challenge with implications on sustainability, urbanization, access to health services and youth empowerment. World Population Day in India Jansankhya Sthirata Kosh (JSK), an autonomous body under the Ministry of Health & Family Welfare observed the World Population Day by organising a Walk towards Population Stabilization from India Gate to Vijay Chowk. The walk was followed by a National Dialogue on Population Stabilization for a Better Tomorrow at Vigyan Bhavan. The Walk was flagged off by Ghulam Nabi Azad, the Union Minister of Health & Family Welfare and Sheila Dikshit, Chief Minister of NCT of Delhi.About Jansankhya Sthirata KoshThe Jansankhya Sthirata Kosh (JSK) (National Population Stabilisation Fund) has been registered as an autonomous Society established under the Societies Registration Act of 1860. JSK has to promote and undertake activities aimed at achieving population stabilisation at a level consistent with the needs of sustainable economic growth, social development and environment protection, by 2045.India and Impacts of Growing PopulationAs per the latest 2011 census, India’s population in India went up by 17.64 percent to 1.21 billion in a decade’s time during 2001--2011 in comparison to 21.15 per cent in 1991--2001. The 2001-2011 period is the first decade with exception of 1911-1921 which has actually added less population compared to the previous decade but states like UP, Bihar, MP, Rajasthan, Jharkhand, Chhattisgarh have witnessed high growth of population .
Themes of Past World Population Day
Posted by Praveen kumar at 8:47 AM