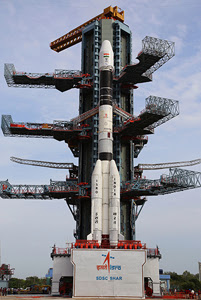 In its new year gift to the nation, the ISRO on Sunday successfully launched a Geosynchronous Satellite Launch Vehicle (GSLV-D5) with an indigenous cryogenic engine from the spaceport of Satish Dhawan Space Centre Sriharikota.
With this launch, ISRO became the sixth space agency in the world after the US, Russia, Japan, China and France to have tasted success with an indigenous cryogenic engine.
"I am extremely happy and proud to say team ISRO has done it. The Indian cryogenic engine and stage performed as predicted, as expected for this mission and injected precisely the GSAT-14 communication satellite into intended orbit," a jubilant K. Radhakrishnan, ISRO chairman said from the Mission Control Room soon after the launch vehicle placed the 1,982 kg GSAT 14 satellite into the intended orbit.
Wasting no time, Prime Minister Manmohan Singh congratulated the ISRO team.
PM congratulates the scientists and engineers of ISRO for the successful launch of GSLV D5 carrying GSAT-14 payload, PMO tweeted soon after the successful launch.
"It is yet another important step that the country has taken in the area of science and technology," Manmohan said, according to the post on Twitter.
When the Mars orbiter was successfully launched into Earth orbit on November 5 last year, BJP's PM candidate and Gujarat CM Narendra Modi was the first one to congratulate the ISRO team.
Launching a GSLV with an indigenous cryogenic engine has been a major challenge for ISRO since 2001 after multiple unsuccessful attempts. Only two of a total of seven attempts succeeded, four were a failure and another a partial success.
GSLV D5's scheduled launch on Aug 19 last year was called off in the eleventh hour after a fuel leak, following which ISRO moved the vehicle back to the Vehicle Assembly Building and rectified the defect.
Sunday's launch is India's eighth flight of GSLV and also the fourth developmental flight of GSLV.
During this flight, the indigenously developed Cryogenic Upper Stage (CUS) was flight tested for the second time. GSAT-14 is India's 23rd geostationary communication satellite, as four of GSAT-14’s predecessors were launched by GSLV during 2001, 2003, 2004 and 2007 respectively.
GSAT-14 would join the group of India's nine operational geostationary satellites.The primary objective of this mission is to augment the in-orbit capacity of extended C and Ku-band transponders and provide a platform for new experiments.
The GSAT-14 will be positioned at 74 degree East longitude and co-located with INSAT-3C, INSAT-4CR and KALPANA-1 satellites.
The 12 communication transponders onboard GSAT-14 will further augment the capacity in the INSAT/GSAT system.
ISRO's Cryogenic Upper Stage Project envisaged the design and development of the indigenous Cryogenic Upper Stage to replace the stage procured from Russia and used in GSLV flights, according to ISRO. ISRO officials had been extremely vigilant in tightening loose ends this time around to avoid an unsuccessful attempt.
Design modifications were implemented wherever required in the launch vehicle along with thorough ground testing and improvements.
The modifications included redesigning of Lower Shroud, which protects the cryogenic engine during atmospheric flight of GSLV-D5 and redesigning of the wire tunnel of the cryo stage to withstand larger forces in flight.
The national space agency also performed two 'Acceptance Tests for flight unit of Fuel Booster Turbo Pump (FBTP), High altitude tests to confirm the ignition sequence in flight under vacuum, to validate design improvements and Cryogenic Main Engine (200 sec) and Steering Engine (100 sec) acceptance tests at Main Engine Test and High Altitude Test.
The rocket weighs 415-tonne and carries a two-tonne advanced communications satellite, ISRO director Deviprasad Karnik said.
"Preparations for final countdown are going on normally to launch the 49-metre Geosynchronous Satellite Launch Vehicle (GSLV-D5) with our cryogenic engine at 4:18pm," Karnik told AFP earlier.
The mission is India's latest attempt to push further into the global market for launching commercial satellites. It comes after India successfully lifted a spacecraft into orbit in November aimed at travelling to Mars, as the country bids to become the first Asian nation to reach the Red Planet.
Sunday's project has had to overcome several hurdles, including an aborted launch in August last year several hours before lift-off after a fuel leak was discovered in one of the rocket's engines.
The first rocket crashed into the Bay of Bengal just minutes after take-off in April 2010 after the cryogenic engines failed to ignite.
It has taken ISRO scientists years to develop cryogenic motors after its bid to import the technology from Russia in 1992 failed because of opposition from the United States. The powerful booster technology, using super-cooled liquid fuel, is designed to put heavier satellites into high orbits, about 36,000 kilometres (22,000 miles) from Earth.
"A cryogenic rocket stage is more efficient and provides more thrust for every kilogram (kg) of propellant (fuel) it burns compared to other solid and liquid fuel stages," Karnik said.
Since 2001, India has bought cryogenic engines from Russia and seven of them have been used on missions.
Chronology of GSLV launches:
GSLV-D1 GSAT-1 April 18, 2001 Successful
GSLV-D2 GSAT-2 May 8, 2003 Successful
GSLV-F01 EDUSAT(GSAT-3) Sept 20, 2004 Successful
GSLV-F02 INSAT-4C July 10, 2006 Unsuccessful
GSLV-F04 INSAT-4CR September 2, 2007 Successful
GSLV-D3 GSAT-4 April 15, 2010 Unsuccessful
GSLV-F06 GSAT-5P December 25, 2010 Unsuccessful
GSLV D5 GSAT-14 January 5, 2014 Successful

Posted by Praveen kumar at 6:48 AM