Disclaimer: -The Postal Assistant/Sorting Assistant Examination Key is prepared by Akula. Praveen Kumar, Sub Postmaster, Papannapet SO-502303 (Medak Division Mob no. 9849636361), Telangana State, in good faith of Postal Assistant exam aspirants. Author of blog does not accepts any responsibility in relation to the accuracy, correctness of answers or otherwise, of the contents. 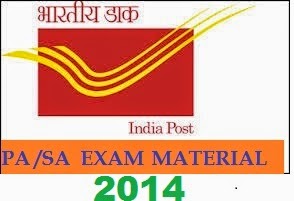 1. Which of the following state does not have legislative council?
Ans :D : Madhya Pradesh

2. The latest addition in fundamental duties under Article-51A of the constitution Ans: A: Providing opportunities for the education to the child or ward___

3. 21. As per the constitution of India, the state legislature shall consist of
Ans: D: Either A or B

4.  If for a period of __ a member of either house of the parliament is without the permission of the house absent from all meetings thereof the house may declare his/her seat vacant
Ans: C:60 days

5. Which amidst the following was not a fort of the Maratha ruler Shivaji?
Ans: D:None of these

6.  Among the Following Who introduced the vernacular press Act?
Ans: A: Lod Lytton

7. Who was the founder of Vijainagar Empire?
Ans: C: Harihar and Bukka

9. The equator does not pass through which of the following countries?
Ans: B: Maxico

10. Earth is made up of more than 100different elements. Arrange the following four important elements in order of their importance (High to Low). Which constitute in the combination of earth ?
Ans: D: Oxygen, Silicion,Aluminium,Iron

12. Three of the following four are alike in a certain way and so form a group. Which is the one that does not belong to the group ?
Ans:B:  Argentina

14. The atomic number of carbon is 12 it means that carbon atom contains
Ans: A: 6 protons and 6 electrons

15. Freezing form of water is same on these scales
Ans: Centigrade and Reaumer

18. which of the following act governs the foreign exchange rules in india
Ans: A: FEMA

19. BIFR Stands for
Ans: B:Board for Industrial and Financial Reconstruction

21. Who among the following is not a Padma Vibhushan awardee 2013?
Ans: D: Rahul Dravid

23. First women who was to be inducted in ICC umpires panel belongs to which country ?
Ans: D:New Zealand

25. Which of the Following does not involve chemical reaction?
Ans: D: Melting of candle wax on heating

38. A cistern is normally filled in 8 hours; but takes two hours more to fill because of leak in its bottom
Ans: C:  40 hours

46.Two cyclists start from the same place in opposite direction, one goes towards North at 18 km/hr. and the other goes towards South at 20 km/hr. What time will they take to be 47.5 km .
Ans: 1 ¼

47. The length and breadth of square are increased by 40 and 30 respectively. The area of resulting rectangle exceeds the area of square is
Ans: C: 82%

48. A car travels a distance of 840 km at a uniform speed. If the speed of the car is 10 km/hr more, it takes two hours less to cover the same distance. The original speed of the car was
Ans; C: 60

50. In an examination, a student scores 4 marks for every correct answer and loses 1 mark for every wrong answer. If he attempts all 60 questions and secures 130 marks, the no of questions he attempts correctly is :
Ans:B:  38

55. The sea is very stormy
Ans: C: adverbs of degree or quantity

60. Crowded opposite in meaning
Ans: A: deserted

61. Revealed opposite in meaning
Ans: B: Concealed

65. Noun which vave two meanings in singular but one meaning in plural
Ans: C: Spectacles

66. Either he is mad, or he feigns madness
Ans: C: Disjunctive or alternative conjunctions

70. Had the Govt made a mistake
Ans: C: Past perfect tense

72. I spoke to him correct passive voice
Ans: A:  He was spoken to by me

Ans: B: let flowers not be plucked

75. He requested her to wait there will be returned
Ans: D: He asked her “ Kindly wait here till I return

76. Which of the following combinations persons in group c
Ans: C: WSV

As per my opinion the cut off would be as follows (Not sure, approximately as it is depend on number of posts available, competition and question paper)

Posted by Praveen kumar at 9:13 AM