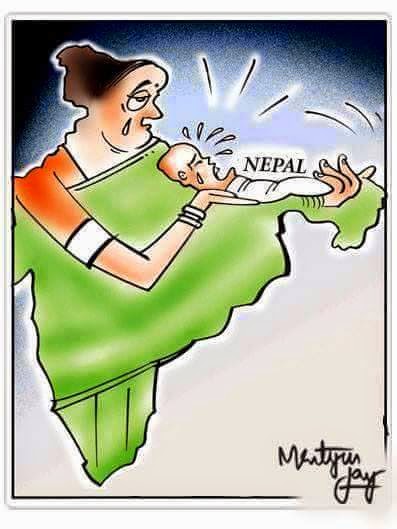 Nearly 1,000 are known to have died in a powerful earthquake in Nepal, with many more feared trapped under rubble, officials say.
The 7.8 magnitude quake struck an area between the capital, Kathmandu, and the city of Pokhara, the US Geological Survey said.
Tremors were felt across the region, with further loss of life in India, Bangladesh, Tibet and on Mount Everest.
The government has declared a state of emergency in the affected areas.
A national police spokesman told the BBC that 970 people had died in the quake, and that more than 1,700 had been injured. At least 539 people were killed in the Kathmandu valley, he added.
Nepali Information Minister Minendra Rijal said there had been "massive damage" at the epicentre, from where little information is emerging.
Get the latest updates on the Nepalese earthquake
"We need support from the various international agencies which are more knowledgeable and equipped to handle the kind of emergency we face now," he said.
The US is sending a disaster response team to Nepal and has released an initial $1m (£0.7m) to address immediate needs, the US aid agency USAid has said. 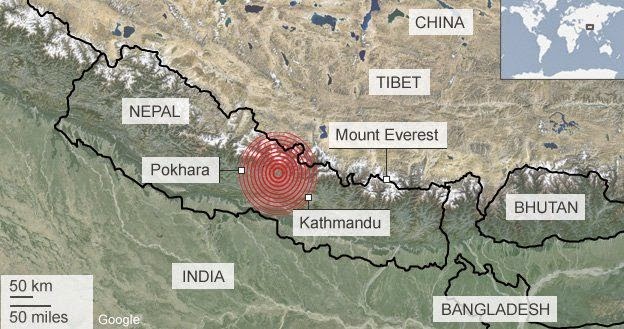 Rescuers are digging through the rubble of collapsed buildings in the capital trying to reach survivors, as thousands prepare to spend the night outside as darkness fell.
A number of historic buildings have been destroyed.
Among those wrecked was the landmark Dharahara tower, with many feared trapped in its ruins.
After the earthquake struck, frightened residents came out into the streets. Mobile phones and other communications have been disrupted.

Major historic monuments in the Nepalese capital have been destroyed in the powerful earthquake, eyewitnesses and officials have said.
These include a nine-storey tower, temples and some parts of what was once a royal palace, all listed as Unesco world heritage sites.
Pictures posted on social media show some of the monuments have been reduced to rubble.
Eyewitnesses say several others now have cracks and could collapse.
Officials have said some temples and monuments at other world heritage sites near Kathmandu have also been damaged.
These sites are Nepal's major tourist attractions.
Nepal had lost several such monuments during a major earthquake in 1934.
Quake levels Nepal landmarks
There are also reports of damage to Kathmandu airport which could hamper relief operations.
With little known about the extent of the damage around the earthquake's epicentre, there are fears the death toll could rise.
Aftershocks continued to ripple through the region hours later.
The quake triggered an avalanche on Mount Everest, killing at least eight people, and another five in Tibet, officials and reports say.
"Running for life from my tent. Unhurt. Many many people up the mountain," tweetedmountaineer Alex Gavan.

At least 35 people have been killed in India, Indian officials say, with one death also reported in Bangladesh.
Indian Prime Minister Narendra Modi has met his ministers to review the situation. Pakistan's Prime Minister, Nawaz Sharif, has pledged help for the Nepalese authorities.
It is the worst earthquake to strike Nepal since one in 1934 all but destroyed Kathmandu.
Posted by Praveen kumar at 1:04 AM