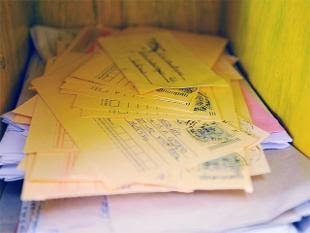 The Department of Posts is incurring a loss of over Rs 7 per postcard and about Rs 5 per inland letter as the revenue earned is far lower than the actual cost.

Most of the services of the postal department are incurring losses barring competition postcard, letter and book post of periodicals.


The department said that total revenue earned including remuneration for savings bank and savings certificates work during the year 2013-14 was Rs 10,730.42 crore while the gross working expenditure was Rs 16,796.71 crore.

The DoP though recovered Rs 593.19 crore from other ministries and departments, so the deficit turned out to be Rs 5,473.10 crore for the reported period.

Posted by Praveen kumar at 8:08 AM