Bathukamma is a festival celebrated by the Hindu women of Telangana region in Andhra Pradesh, India. It is followed by Boddemma, which is a 7-day festival. This festival falls in September–October called Ashvin or Aswiyuja. Bathukamma is celebrated for nine days during Durga Navratri.It starts on the day of Mahalaya Amavasya. It concludes two days before Dussera, called Durgashtami. On the final day, the closing ceremony of Bathukamma panduga is celebrated as a great festival – Pedda Bathukamma or Saddula Bathukamma. 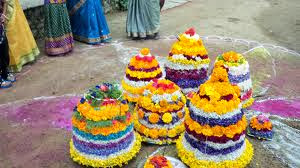 Bathukamma is a beautiful flower stack, arranged with seasonal flowers, in seven concentric layers, of potter’s clay like a cone. Bathuku in Telugumeans live/life, and Amma means mother; hence Bathukamma, is celebrated for the glory, later denoted as Goddess Gauri – the patron goddess ofwomanhood.Women celebrate the festival dressed up in traditional pattu saris, and wear jewellery. 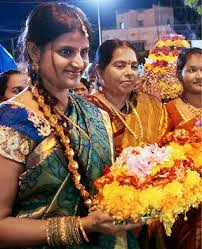 First five days starting on amavas half moon day they clean the area in front of their house vakili (porch), they spray water with cow dung and draw the muggu (Rangoli) with rice powder or white wash. The first five days Batukamma is prepared with cow dung five small lumps like cups and arranged in front of their main door in middle placing one four surrounding. All girls play in circle, clapping together and signing songs narrating stories of historical and legends and god and goddesses. On this day, the men of the house go into the wild plains and gather flowers like gunuka, tangedi, lotus, alli, katla and teku, which bloom in this season in various vibrant colors all across the uncultivated and barren plains of the region.
Women start preparing bathukamma from the afternoon. They cut the flowers leaving the little length base, some dip in colours, some scented and arrange them on a wide plate called tambalamu, and stack them up in a conical mound, decorated with a pumpkin flower on top of the stack.
In the evening, women gather in large numbers with their bathukammas in their locality, place them in the middle and dance around them, synchronizing steps and claps in unison, and singing soul stirring bathukamma folk songs.After singing and dancing around for hours, Bathukammas are taken to a lake or a pond and spend some more time singing and dancing and are set afloat in the water.

This festival is celebrated for nine days and concludes on Durgastami. The main festival day is called Saddula Bathukamma. On this day they celebrate into the small hours before leaving their Bathukamma in water. 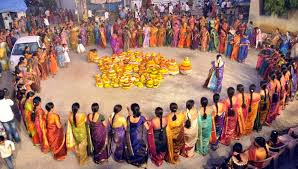 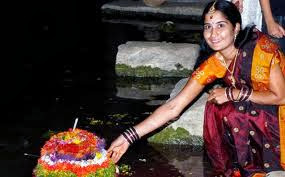 MYTH
once upon a time King Dharmangada of Chola Dynasty used to rule South India. After many prayers and rituals, his wife gave birth to Princess Lakshmi. Baby Lakshmi survived many accidents. So, the parents named her Bathukamma (Bathuku = life, Amma= suffix to female names and mother). Since then Bathukamma festival is celebrated by young girls in Telangana region. The purpose of this festival is to pray to the Goddess in the belief that the young girls would get husbands as per their wish, to teach the young girls how to take care of her in-laws, her husband, be a great women who respects elders, loves the people around and a women to respect her elders, be a guide to the younger ones of her. Further, married women celebrate the festival to pray to the Goddess for good health and prosperity of their family. Flowers are arranged on a plate or square wooden plank or a square bamboo frame in a conical layout. On the top, gynecium of a pumpkin flower or a cone made of turmeric to represent Bathukamma is installed. This floral arrangement is worshipped as Goddess Bathukamma. This festival is mainly celebrated by unmarried young girls, though men and women also participate in collecting and arranging the flowers as Bathukamma.
There are many myths behind this festival. According to one myth Goddess Gauri killed 'Mahishasura' the demon after a fierce fight. After this act, she went to sleep on the 'Aswayuja Padyami' day, due to fatigue. The devotees prayed to her to wake up, and she woke up on the Dasami (also spelt as "Dashmi) day.
The other being Bathukamma, as the daughter of the 'Chola' King 'Dharmangada' and 'Satyavati'. The king and queen lost their 100 sons in the battlefield and prayed to Goddess Lakshmi to be born in their house, as their child. Goddess Lakshmi heard their sincere prayers and chose to oblige them. When Lakshmi was born in the royal palace, all the sages came to bless her and they blessed her with immortality "Bathukamma or live forever".
Batakamma or 'Parvati', according to one legend, is a lover of flowers. Flowers are arranged on a square wooden plank or a square bamboo frame with the size of frames tapering off to form a pinnacle on top. They resemble the shape of a temple 'Gopura'. A lump of turmeric is kept on top of the flowers. This little floral mountain is worshipped as Goddess Batakamma.
Women mainly celebrate this festival, though men also participate in decorating and arranging the beautiful floral mounts of Batakamma. Young girls participate in large numbers.
This festival is celebrated with joy and gaiety. During these celebrations, there are dance performances, music, dramas and a variety of entertainments as thousands of tourists and locals too, flock to witness the happenings. 'Jataras' are also held during this month long celebrations.

Posted by Praveen kumar at 3:37 AM