Once upon a time a Washerman was bringing up two donkeys. Let us say Donkey-A and Donkey-B.
Donkey-A felt it was very energetic and could do better than the other. It always tried to pull the washerman's attraction over it by taking more load and walking fast in front of him.
Innocent Donkey-B is normal, so it will walk normal, irrespective of the washerman's presence.
After a period of time, Washerman started pressurizing Donkey-B to be like Donkey-A. But Donkey-B unable to walk fast and got continuous punishment from washerman. It was crying and told personally to Donkey-A "Dear friend, only we two are here, why to compete with each other. We can carry equal load at normal speed." That made Donkey-A all the more energetic and next day it told to washerman that it can carry more load and even it can run fast too. Obviously happier washerman looked at Donkey-B, his BP raised and he started kicking Donkey-B.
Next day with smile, Donkey-A carried more load and started running fast. But it was breath taking for Donkey-B and it couldn't act that way. But the washerman was frustrated, so he harassed Donkey-B terribly, and finally it fell down hopelessly. Then Donkey-A felt itself as a super and happily started carrying more load with great speed. But now the load of the Donkey-B is also being carried by Donkey-A., and still it has to run fast.
For some period it did, finally due to fatigue it got tired and started feeling the pain. But washerman expected more from Donkey-A. It also tried best, but couldn't cope up with his owners demand. The Washerman got angry with Donkey-A also and started harassing to take more load. Donkey-A was crying for long time and then tried its best. But it couldn't meet the owner's satisfaction.
Finally the day came when due to frustration the washerman killed Donkey-A and went for searching some other donkeys. It’s an endless story. 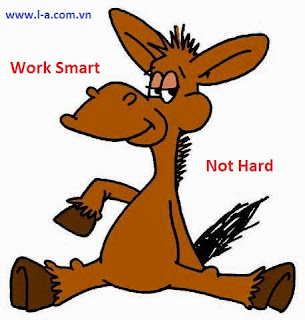 The moral of the story in corporate life is:


"Think all colleagues are same and that everyone is capable. Always share the Load equally. Don't ever act smart in front of your Boss and never try for getting over-credit. Don't feel happy when your colleague is under pressure." And most importantly, Never Work Hard, Work Cleverly. "Success is a journey not a destination!"
Posted by Praveen kumar at 1:58 AM