Save the girl child

How sad, many girls missing from our country are found buried in some graveyard....
'Perseverance and inspiration often leads to privilege but without hard work and dedication they'll be no success. The hardest profession to take in life is being a girl child. Discrimination and discrepancy are two most important factors that hamper the journey of every female from the earliest stage of life. Starting from her presence into her mother’s womb to infancy, childhood and finally to adulthood, she is outnumbered by the male dominating society of the country.

India is growing dynamically in every fields. Today, the boom in economy, innovative technologies and improved infrastructure has become nation’s pride. The country has witnessed advancements in all fields but bias against a girl child is still prevailing in the country. 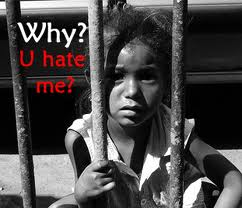 However, in maximum conceptions, one is unaware of the pregnancy until actual realization dawns after one skips the first menstrual cycle. Normally doctors except ladies to pay their first visit anywhere between the sixth and twelfth week after conception.

Amniocentesis started in India in 1974 to detect fetal abnormalities. These tests were used to detect gender for the first time in 1979 in Amritsar, Punjab. Later the test was stopped by the Indian Council of Medical Research but it was too late. The benefits of these tests were leaked out and people started using it as an instrument for killing an innocent and unborn girl child.  Many of the traditional women organizations also took up cudgels to stop this illegal practice but all failed and with the passage of time these tests became a major contributor to bias against a girl child.

Female feticide and infanticide is not the only issues with a girl child in India. At every stage of life she is discriminated and neglected for basic nutrition, education and living standard. When she was in the womb, she was forced to miss the moment when she was supposed to enter the world. At the time of birth her relatives pulled her back and wrung her neck. After killing her she was thrown into a trash can.

Poverty, gender discrimination and son preference have also influenced the nutritional status of a girl child. There are almost 75 million malnourished children existing in the country. It is estimated that 75% of the total malnourished children are girls who show signs of chronic and acute malnutrition.

Girls who manage to cross this hard phase of life, gets trapped by the evil society during adolescence and teenage. These are the stages where more nutrition is required for normal growth and development. Unfortunately, nutritional needs are neglected for girls and they are often kept locked within the four walls.

Exacerbate discrimination against female for nutrition and education has led to an increase in child marriage, reduction in fertility rates and population growth, potentially, women’s participation in nurturing the future of every nation.

Improper nutrition during adolescence results in various reproductive health disorders. The effects of these disorders further exacerbates by early marriage, closely spaced pregnancies, poor access to information about family planning, traditional practices, etc.
During childhood, her brother was loaded with new shoes, dresses and books to learn while she was gifted a broom, a wiper and lots of tears. In her teenage, she missed tasty delicious food to eat and got only the crumbs. During her college days, she was forced to get married, a stage where illiteracy, lack of education resulted in high fertility rate, aggravating the condition of females in the country. Again if this female gives birth to a girl child, the journey begins once again. She missed all roses of life and was finally fitted to a graveyard. That’s where she got peace of mind.

The nation of mothers still follows a culture where people idolizes son and mourns daughters. UN figures out that about 750,000 girls are aborted every year in India. Abortion rates are increasing in almost 80% of the India states, mainly Punjab and Haryana. These two states have the highest number of abortions every year. If the practice continues, then no longer a day will come when Mother India will have no mothers, potentially, no life.

We all are proud citizens of India. The need of hour is to realize our responsibilities and give a halt to this evil crime. What can we do to curb the brutal and undesirable practice of mass killing girls? A determined drive can initiate a spark to light the lamp and show the world that we all are part of the great Mother India

Posted by Praveen kumar at 2:17 AM