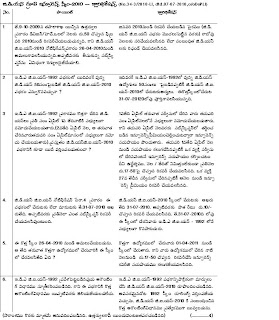 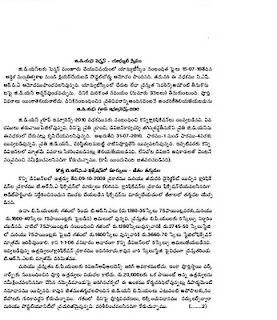 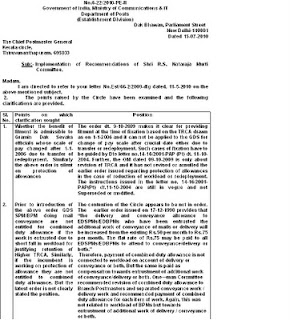 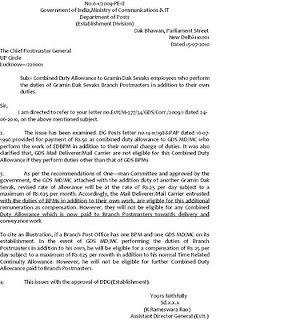 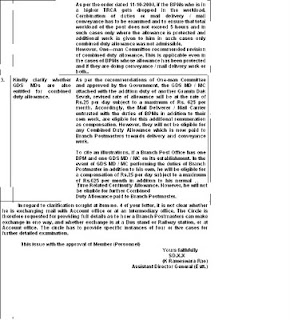 Posted by Praveen kumar at 4:50 AM No comments:

THE PROPOSAL FOR INTRODUCTION OF ANNUITY SCHEME IN LIUE OF PENSION FOR THE GDS EMPLOYEES HAS BEEN CLEARED BY THE MINISTRY OF FINANCE ON 15-07-2010. THE POSTAL BOARD HAS ALSO APPROVED THE SAME. THE NEXT PROCESS FOR THE IMPLEMENTATION OF THE SCHEME IS TO GET APPROVAL FROM PFRDA. THEREAFTER THE SCHEME WILL BE NOTIFIED. OPTION WILL BE CALLED FOR AMONG THE EXISTING GDS EMPLOYEE WHETHER HE / SHE IS WILLING TO SWITCH OVER TO THE NEW ANNUITY SCHEME OR TO CONTINUE IN THE PRESENT SEVERANCE AMOUNT SCHEME. ACCORDING TO THE SCHEME THE DEPARTMENT WILL CONTRIBUTE RS.200/- PER MONTH FOR EACH GDS AND ACCUMULATION WILL BE ANNUITISED AND BENEFITS PAID TO GDS.
Posted by Praveen kumar at 5:31 AM No comments:

The Indian rupee will soon have a unique symbol -- a blend of the Devanagri 'Ra' and Roman 'R' -- joining elite currencies like the US dollar, euro, British pound and Japanese yen in having a distinct identity.
The new symbol, designed by Bombay IIT post-graduate D Udaya Kumar, was approved by the cabinet today -- reflecting that the Indian currency, backed by an over-trillion dollar economy, was finally making its presence felt on the international scene.
Though the symbol will not be printed or embossed on currency notes or coins, it would be included in the 'Unicode Standard' and major scripts of the world to ensure that it is easily displayed and printed in the electronic and print media.
Among currencies with distinctive identities, only the pound sterling has its symbol printed on the notes.Unicode is an international standard that allows text data to be interchanged globally without conflict. After incorporation in the global and Indian codes, the symbol would be used by all individuals and entities within and outside the country.
Posted by Praveen kumar at 10:21 PM No comments: