All  India Conference of NUGDS is going to be held at Kharaghpur, WB state from 2.10.2015 to 3.10.2015. All divisional and branch secretaries are requested to mobilize GDS officials more to participate in the meeting. 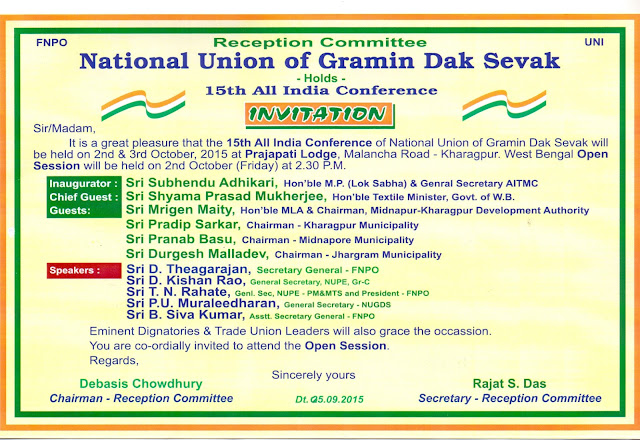 PM breaks down while recalling his mother’s sacrifices

Prime Minister Narendra Modi broke down while answering questions at a Town Hall event in Facebook campus in San Jose when he talked about the sacrifices of his mother.
65-year-old Modi displayed his rare emotional side when he was asked by Facebook CEO Mark Zuckerberg to tell the audience something about his parents.

“We have many things in common. Family is very important to us. Both my parents are here. I understand your mother is very important in your life,” Zuckerberg told the prime minister.
Modi was moved to tears while talking about the hardships his mother, Heeraben Modi, 95, had to undergo while raising him.
“When we were small, to sustain us she cleaned dishes, filled water, did laborious work at the neighbouring houses. You can imagine a mother, in order to raise her kids, underwent so much hardship,” Modi spoke as he tried to control his tears, amid a hushed silence at the event.
After a pause, he continued, “It’s not just the case with Narendra Modi, many mothers in India sacrifice their entire lives for their children.”
“There are so many parents who have sacrificed their own lives to fulfil the dreams and aspirations of their children,” he said.
“A mother will never want you to become something, she will think about how you will achieve that”.
“I’ve my mother, who is over 90 years. Even today she does all her works on her own. She isn’t educated but because of television she is updated with the news, what is happening in the world otherwise she didn’t know.”
Modi congratulated Zuckerberg’s parents, saying their son has changed the world, as he asked them to stand up for everyone to see.
“My parents have played a very big role in my life, I come from a very poor family... you probably know that I used to sell tea at the railway station,” he said.
“No one can imagine that such a big democracy of this world has made a tea seller its leader. And therefore firstly I want to thank those 1.25 crore Indians who made such an ordinary person like me their own.”

-The Hindu
Posted by Praveen kumar at 12:24 AM No comments:

In the UK, Post Office Ltd has signed a five-year contract with the DVLA that will enable drivers to renew their photocard driving licences using new world-class technology.
The enhanced service means that from next spring, selected Post Office branches will have a dedicated counter position where drivers renewing the photograph on their 10-year licence will have their paperwork scanned into a computer, their photograph taken, an electronic signature captured and the data sent immediately by secure electronic link to the DVLA. The DVLA will then check the application and post a new photocard licence to the driver.
Alan Cook, Post Office’s managing director, said: “We will be the first post office in the world to use groundbreaking technology for document and identity verification technology in this way and it puts us in a strong place to use the trusted Post Office brand, our unrivalled network and our experienced staff to bid for other major government contracts.”
The new technology will be installed in up to 750 Post Office branches around the. Initially the technology will just be used for 10-year photocard renewal but it may be extended to include other driver transactions.
Do you think  post also move in this way to get more revenue ??
Posted by Praveen kumar at 1:55 AM No comments: 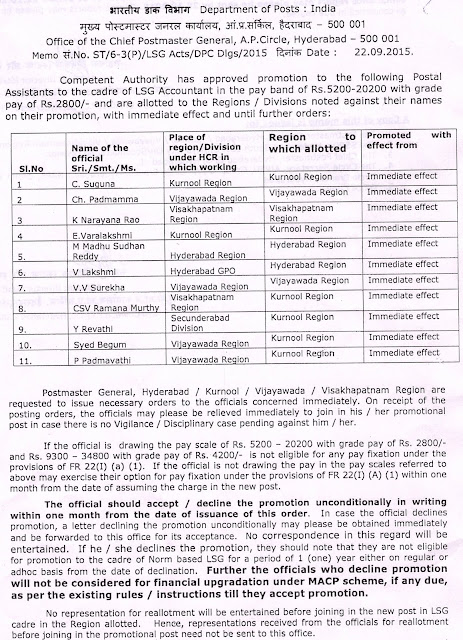 Posted by Praveen kumar at 1:54 AM No comments:

The Seventh Pay Commission report is awaited; it is that time of the decade when Government offices are buzz with expectation and excitement. Revision of salaries of the government employees in the country is a decennial affair. Governments, several of them, have continued with this practice despite the recommendations to the contrary, that is, to reduce the period and have a more frequent pay revision of the government employees. The 7th Pay Commission was appointed in 2014; normally the Commissions have been asked give their reports after due study of pay and allowances of government employees in 18 months. Last month, that is August, the Commission ought to have submitted it’s report. Revision of pay scales is with effect from 1st. Jan 2016. If there is delay in implementation, which generally is the norm, it will be with retrospective effect without change in the due date.

Starting from the fourth pay commission, award of every commission has bought a virtual bonanza to the employees of the Government. Goa has one of the highest proportion of government employees to population. The all India average relatively is lower. There are 48 lakh Central Government employees and over one crore state and local government staff. Out of a total workforce of 47 Plus crore, almost 44 crore are in the unorganized sector. They are not covered by any Pay Commission; from time to time governments do fix the minimum wage rate which is neither uniform across the country nor is it followed strictly in letter and spirit. Viewed from this perspective, the pay panel’s exercise is not significant.

Yet, the Pay Commission recommendations are important from different perspectives. It has the potential to kick start the economy that has not seen growth revival for quite some time. Latest release of data regarding inflation in the economy indicates the decline of retail inflation for the second successive month. Actually, the WPI is in the red, which is a rare phenomenon. By putting more money in the hands of the employees, government might succeed in creating more demand for goods and services. With federal states following in the footsteps of the centre, it is likely to sustain the enhanced demand for a longer time. At least with a time lag it is likely to have a rub off effect on pay and allowances in the organized private sector.

Pay and pension of central government employees amount to a full 1% of nation’s GDP. More pay will only further add to the burden of the exchequer. When the last pay commission’s recommendations were implemented, the fiscal deficit doubled to more than 6% in 2008-09. According to the estimates submitted to the Parliament, government employees are likely to get a pay hike of around 16%. According to an estimate, this would be around 0.2 to 0.3% of GDP. Going by the recommendations of the previous commissions, the average gross increase would be much higher, may even top 40%. The fear of higher fiscal deficit may force the government to effect cuts in spending, with education and healthcare more likely to be the ‘soft’ targets. This will hurt the poor and lower middle class sections of our society. The government is also likely to go slow on investment in infrastructure; even in normal times government’s expenditure on capital goods is not high. This will impact the recovery process in the economy and adversely impact the GDP growth rate.

Since the appointment of 7th Pay Commission was done well in advance, there is enough lead time for submission of report. Further, if the Government takes an early decision to implement the recommendations of pay revision, it will not have to shoulder the burden of arrears of pay. In all the previous pay commissions, payment of arrears was a huge financial burden; in the last pay commission revision, arrears of salary hikes for up to two years had to be paid by governments.

Apart from pay hike, there are other expectations from this pay panel. Keeping in view the rise in life expectancy and dearth of competent staff, the age of retirement may be tweaked in favour of the employees. Performance-linked pay is another area the commission may take a serious look at. Flexible working hours to facilitate women and persons with certain disabilities deserve consideration by the pay panel. The recommendations, therefore, are significant and have far-reaching impact.
Source : http://www.navhindtimes.in
Posted by Praveen kumar at 11:42 PM No comments:

Central employees may cheer for higher bonus this year

After long times Central Govt. employees are going to get higher amount of bonus this year. Earlier, the ceiling for bonus was Rs 3500 per month. From this year, the ceiling is going to be increased to as high as Rs 10,000 per month. In a letter from Secretary, Ministry of Labour and Employment, Mr S. Agarwal conveyed this good news to Sri Vijesh Upadhyay, Genl. Secy., Bharatiya Mazdoor Sangha. 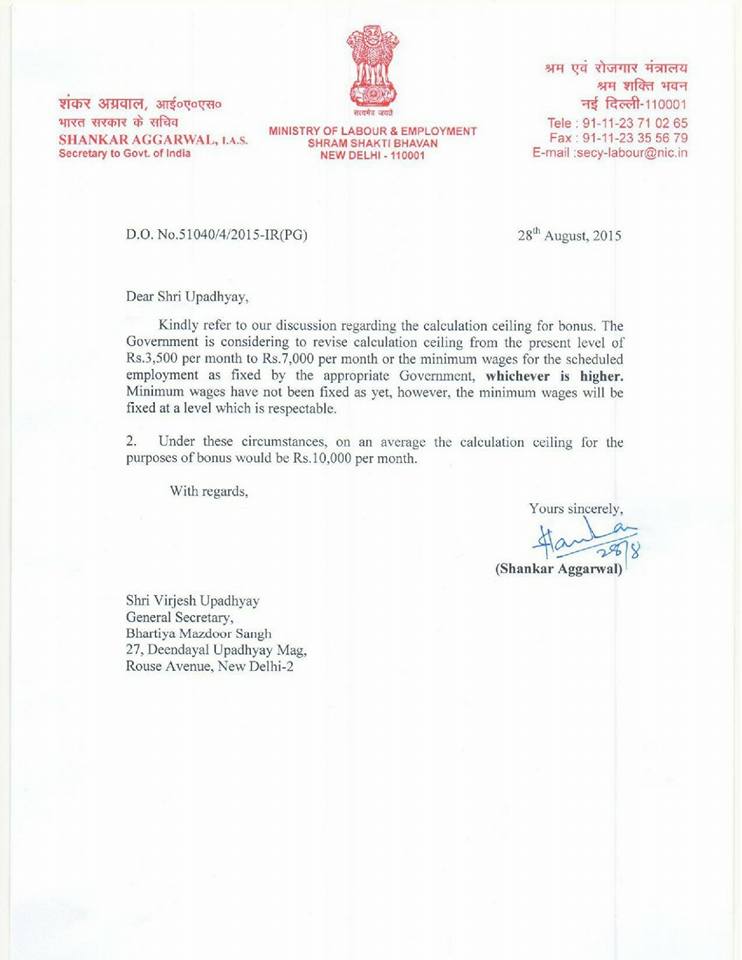 Posted by Praveen kumar at 12:09 AM No comments:

NATIONAL INSURANCE TIE UP WITH POSTAL DEPARTMENT FOR PMBSY :-

The National Insurance Company, on Monday, signed a memorandum of understanding with the Department of Posts for marketing of insurance policies under the Pradhan Mantri Bima Suraksha Yojna. The scheme will initially be across 800 head post offices all over , the company said in a press release. According to Rajesh Aggarwal, CMD, National Insurance, around seven crore enrolments have been done by all companies, of which, two crore enrolments are from poorer sections of society. National Insurance has enrolled almost half of total enrolment (around 3.5 crore), it said in a release.
Source: The Hindubusinessline
Posted by Praveen kumar at 12:07 AM No comments: