In the December 2014-January 2015 issue, the periodical ranked Hyderabad at second position on the list.
Hyderabad is the second best place in the world that one should see in 2015, according to an international travel publication.

The Presidio of San Francisco in the US ranked first on the "Best of the World - 20 Places You Should See in 2015" list, published in the annual guide of 'Traveler' magazine of National Geographic.

In the December 2014-January 2015 issue, the periodical ranked Hyderabad at second position on the list, which included cities Zermatt in Switzerland, National Mall in Washington D C, Corsica, Choquequirao in Peru, Sark in Channel Islands, Koyasan in Japan, Oklahoma City, and Maramures in Romania.

"Stories of Hyderabad's poetic past weave amid strings of programming code in this South Eastern India city that was home to one of the richest men in the world, Mir Osman Ali Khan, the last ruling nizam of Hyderabad," the periodical said.

It goes on to talk about how Hyderabad has now become a seedbed for many global IT brands, the opulent Taj Falaknuma Palace, Irani cafes, fifth generation pearl merchants and other attractions.

According to Andhra Pradesh Reorganisation Act, 2014, Hyderabad will remain common capital of Andhra Pradesh and Telangana for a period not exceeding ten years; thereafter it will be part and parcel of Telangana.
Posted by Praveen kumar at 3:27 AM No comments:

Posted by Praveen kumar at 2:36 AM No comments:

Mathur: The Village That Speaks Sanskrit

For the last 600 years, the Sankethis, a community of Brahmins that migrated from Kerala, have been living together and leading an insular way of life. Daily life revolves around Sanskrit. Aham Gacchami (I am going) and other expressions in the ancient language can be heard on the street. Since the language is spoken by people wearing jeans and t-shirts or while talking over a cell phone or riding a motorbike, Mattur has become a quaint metaphor for ancient India in modern times.

Most residents of the village are happy that the Narendra Modi government plans to replace German with Sanskrit in CBSE schools. "Of course, children in India must necessarily study Sanskrit. The Vedas can help children lead fuller lives as they teach about how to lead a better family life, to understand the metaphysical aspect of life and so on," says Madhukar, who resigned from his job at Cisco as a software engineer and returned to the village to set up a garments business.
Almost every house in this Brahmin village has an IT professional and many of them are working abroad. The Sankethis are proud of their culture and almost every NRI makes it a point to attend rituals and festivals back home.
[From: http://articles.economictimes.indiatimes.com/2014-11-23/news/56385155_1_sanskrit-village-mattur - the author makes some stupid questions about why a sanskrit village should have mobile phones etc..  Shows how shallow people think and I have left out those parts from this excerpt.. ]
The crime rate is extremely low, given that the village by itself is one extended family. "There is not a single property dispute pending before courts from this village. We have a culture of cohesion that has been around for generations and we have managed to keep it going," says Yadu, who, like Madhukar, goes by one name and is a software professional.
The Mattur school has one of the best records in the district and boasts of toppers year after year. The teachers at the school say that learning Vedas and the chanting have helped children with their memory and focus. The software engineers here say their training in chanting has helped them with their academics.
Yadu, who works with Hewlett Packard, says that the daily practice of chanting was the reason for the village boasting of hundreds of software engineers. "We naturally developed an aptitude for maths and logic as well," he said.
Source:-http://hinduismnow.org
Posted by Praveen kumar at 2:05 AM No comments:

For Indian forces deployed in Siachen, it is less of a challenge to watch out for the frail Pakistani forces but to just stay atop this 76 kilometers long glacier at 5,400 meters altitude (nearly twice the altitude of Ladakh and Kargil) in itself means you have to defy all of your physical, mental and spiritual limits.

1. In Siachen, you are at the risk of getting a deadly frostbite if your bare skin touches steel (gun trigger, for example) for just over fifteen seconds.

2. Mountain climbers climb when the weather is at its best; soldiers serve in these treacherous terrains all year round.

4. Speech blurring is as obvious as toothpaste freezing in the tube

5. Snowstorms in Siachen can last 3 weeks.

6. Yearly snowfall in Siachen can be well over 3 dozen feet

7. The 7th Pay commission may consider the unique challenges faced by the army jawans who man the territory all through the year.

8. Soldiers find ways to entertain themselves when they can.

9. Fresh food – that’s rare. Very rare. At Siachen, an orange or an apple can freeze to the hardness of a cricket ball in no time.

10. Army pilots literally push their helicopters well beyond their optimal performance, every day!

11. In the last 30 years, 846 soldiers have sacrificed their lives at Siachen.

12. A War Memorial at the Bank of Nubra River has the names of Indian soldiers who laid their lives in Siachen.

13. Local saying: “The land is so barren and the passes so high that only the best of friends and fiercest of enemies come by.’

14. In Siachen, the Indian Army spends as much as 80% of its time preparing soldiers of deployment.

15. “We do the difficult as a routine. The impossible may take a little longer”

16. When you go home, tell them of us and say, for your tomorrow we gave our today.

"SALUTE TO OUR SOLDIERS AT SIACHEN"
Posted by Praveen kumar at 4:30 AM No comments:

Aadhaar based authentication of Life Certificate for pensioners. 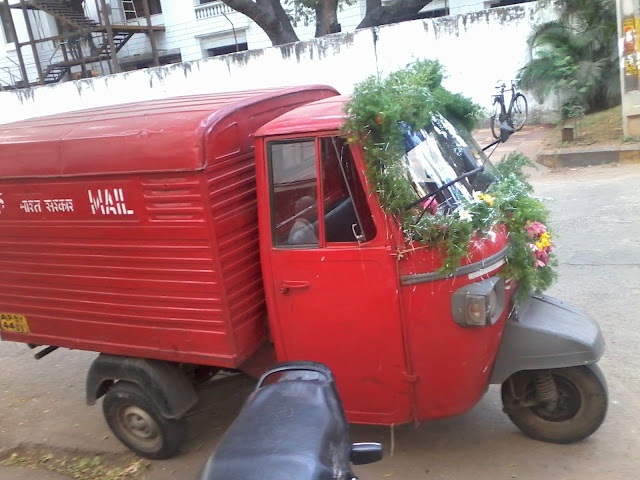 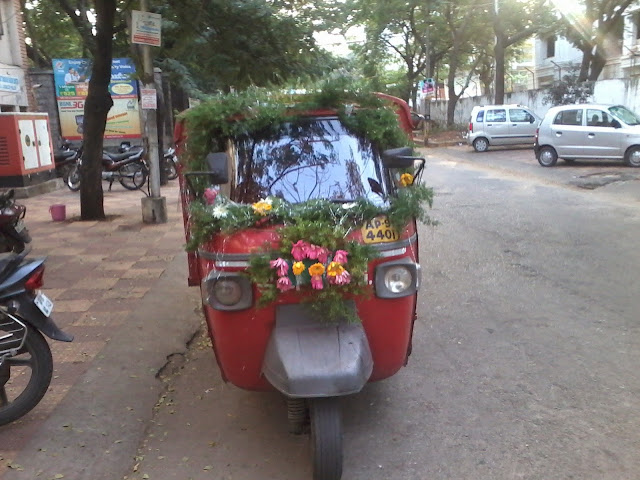 Now letter boxes in city for selected Post offices are to be cleared by utilizing mini auto services. The LB clearance starts from  Himayat nagar Post office and  passes through Banjarahills,  Film nagar, Jubileehills, Cyberabad (Hitech city),  Gachibowli and Kothaguda delivery post offices LB located in road Points.  Total 28 LBs are proposed to clear through this auto. Starts at 3.00 PM at origin (Himayatnagar) and will complete clearance around  8.00 PM.  The “Nanyata” ( LB clearance checking software) check up is also added to this service.
Source : http://www.telugupostmasters.blogspot.in/
Posted by Praveen kumar at 4:17 AM 1 comment:

KARIMANAGR HO under Telangana & AP Circle has been successfully migrated to CBS Finacle on 24.11.2014

Karimnagar HO under Telangana & AP Circle was successfully migrated to CBS Finacle on 24.11.2014. 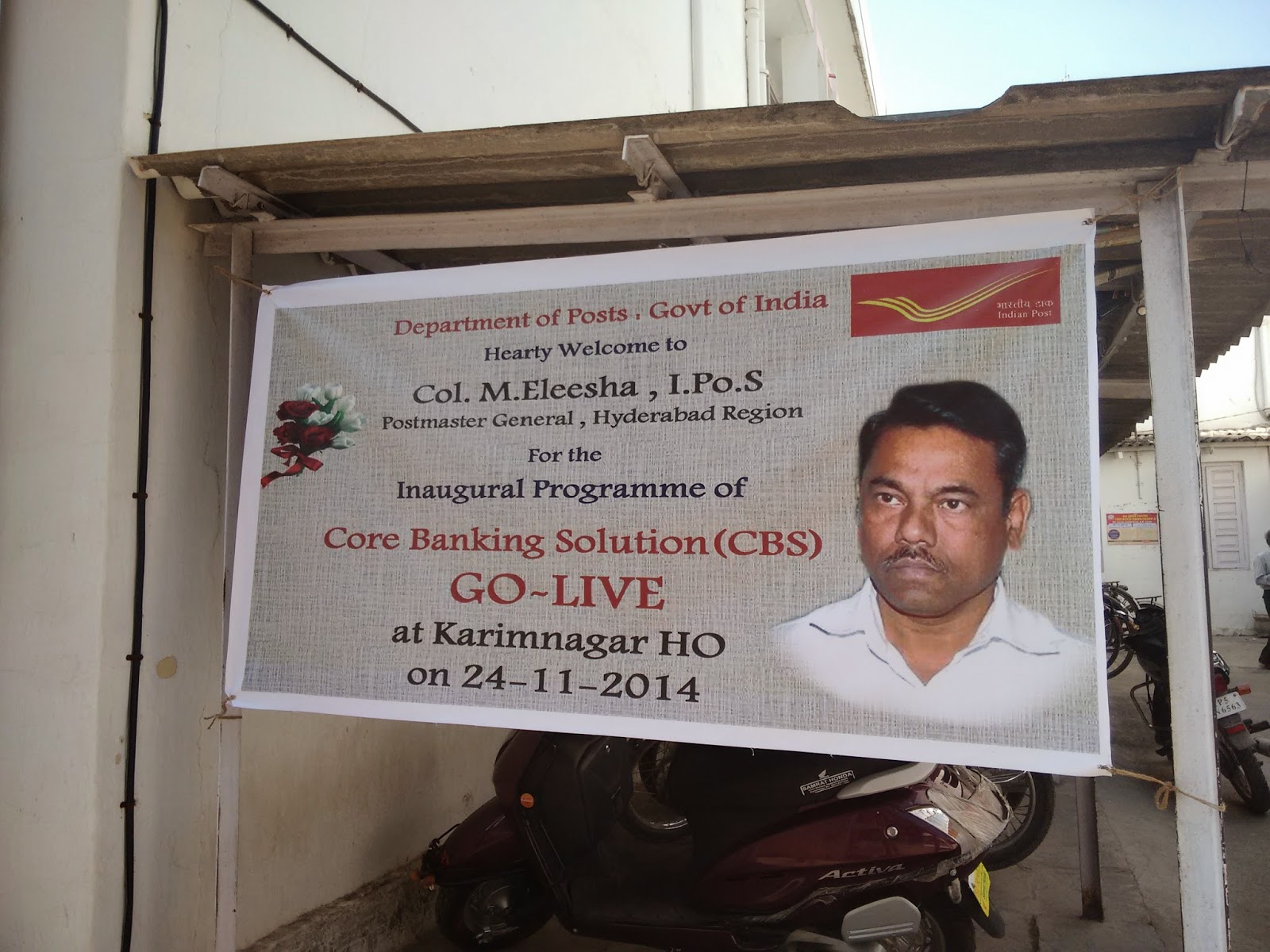 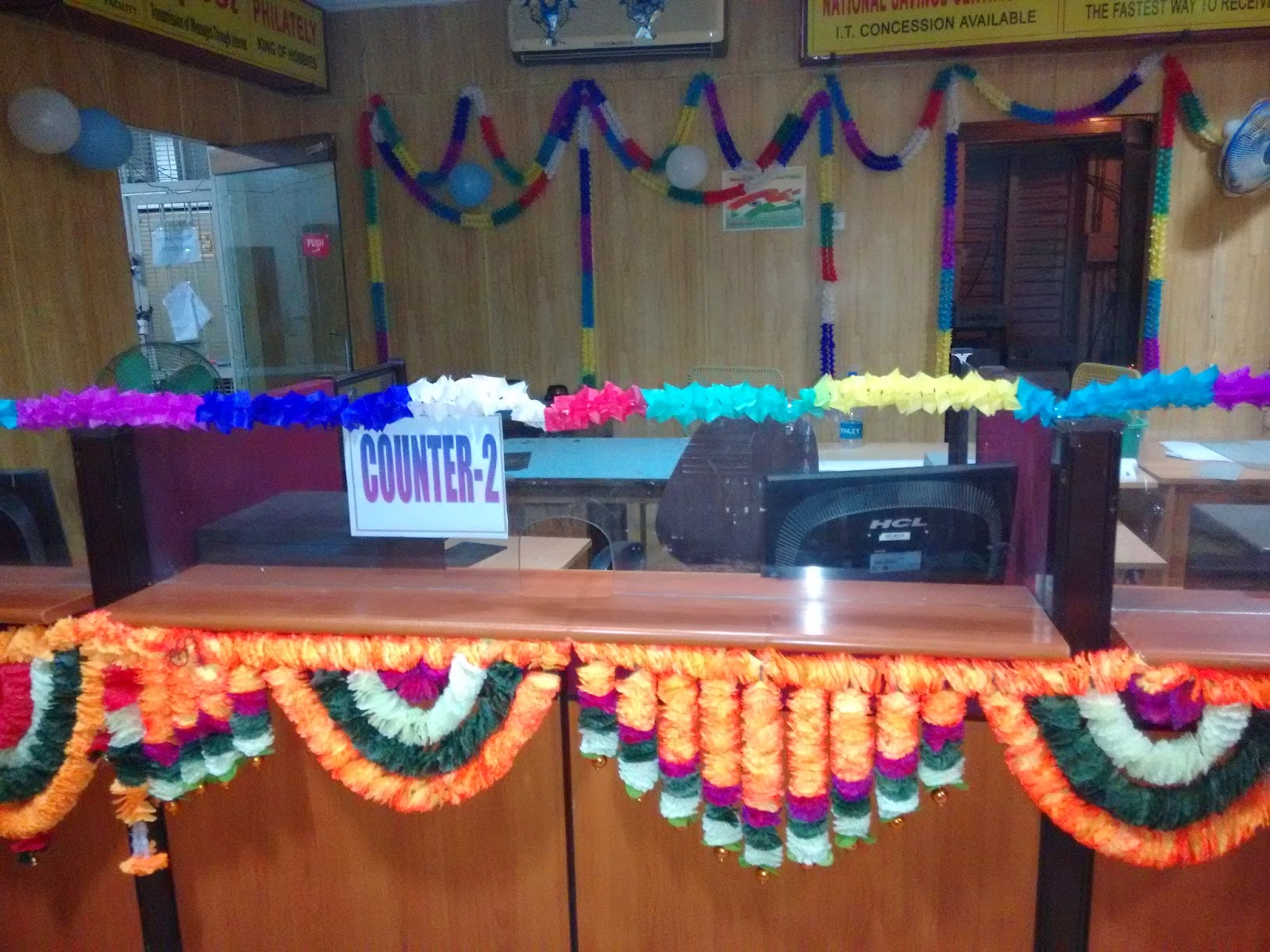 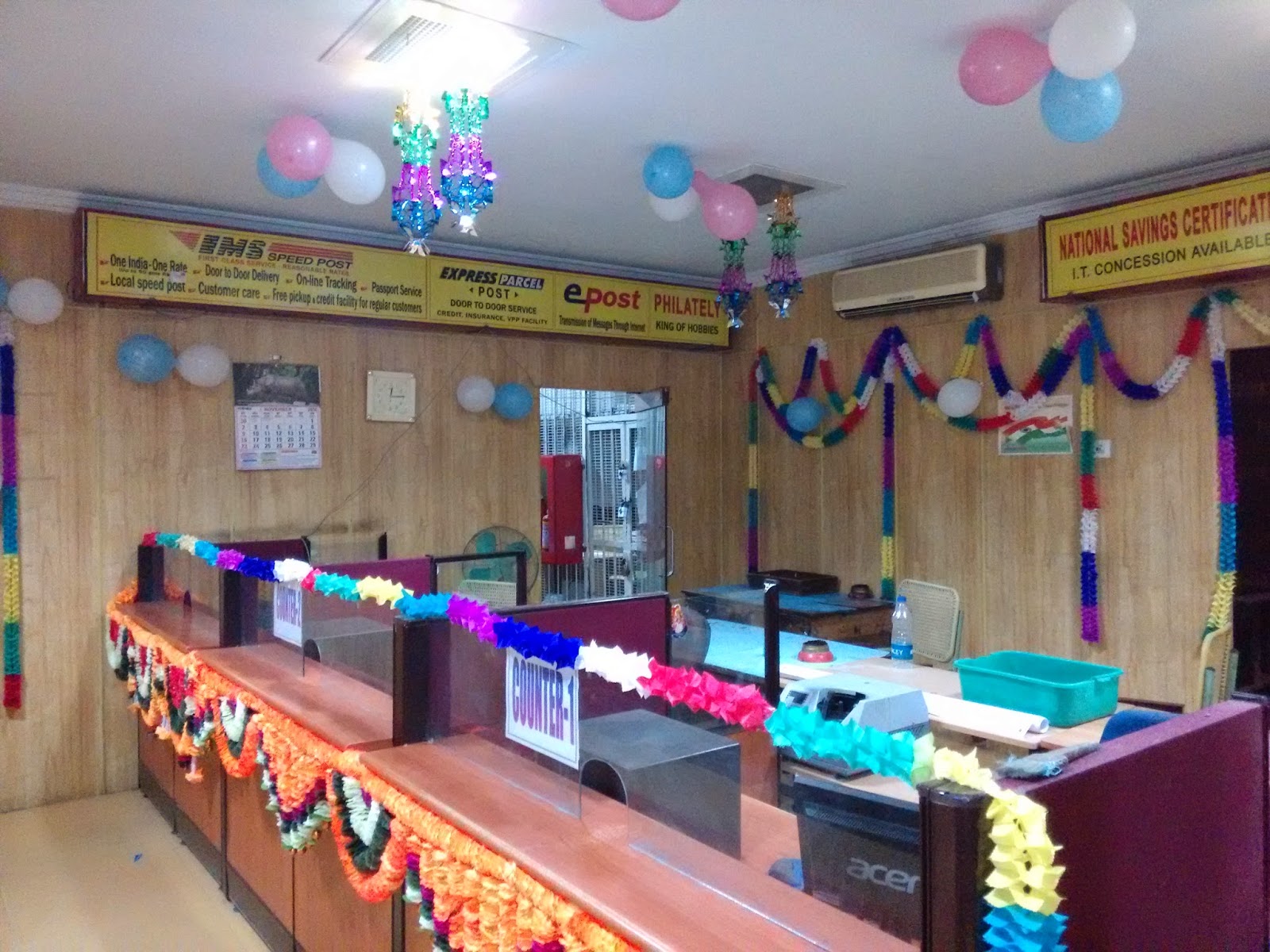 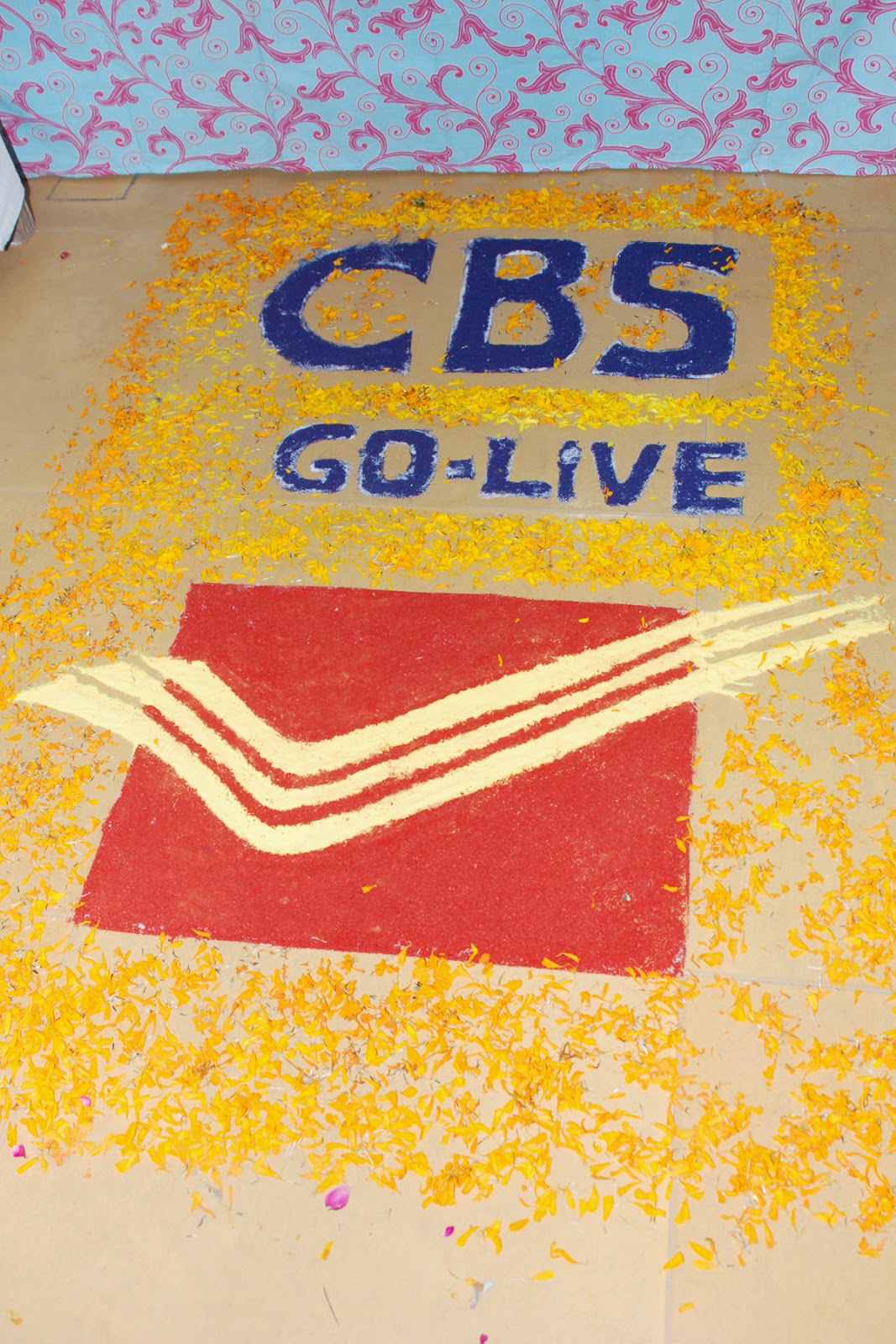 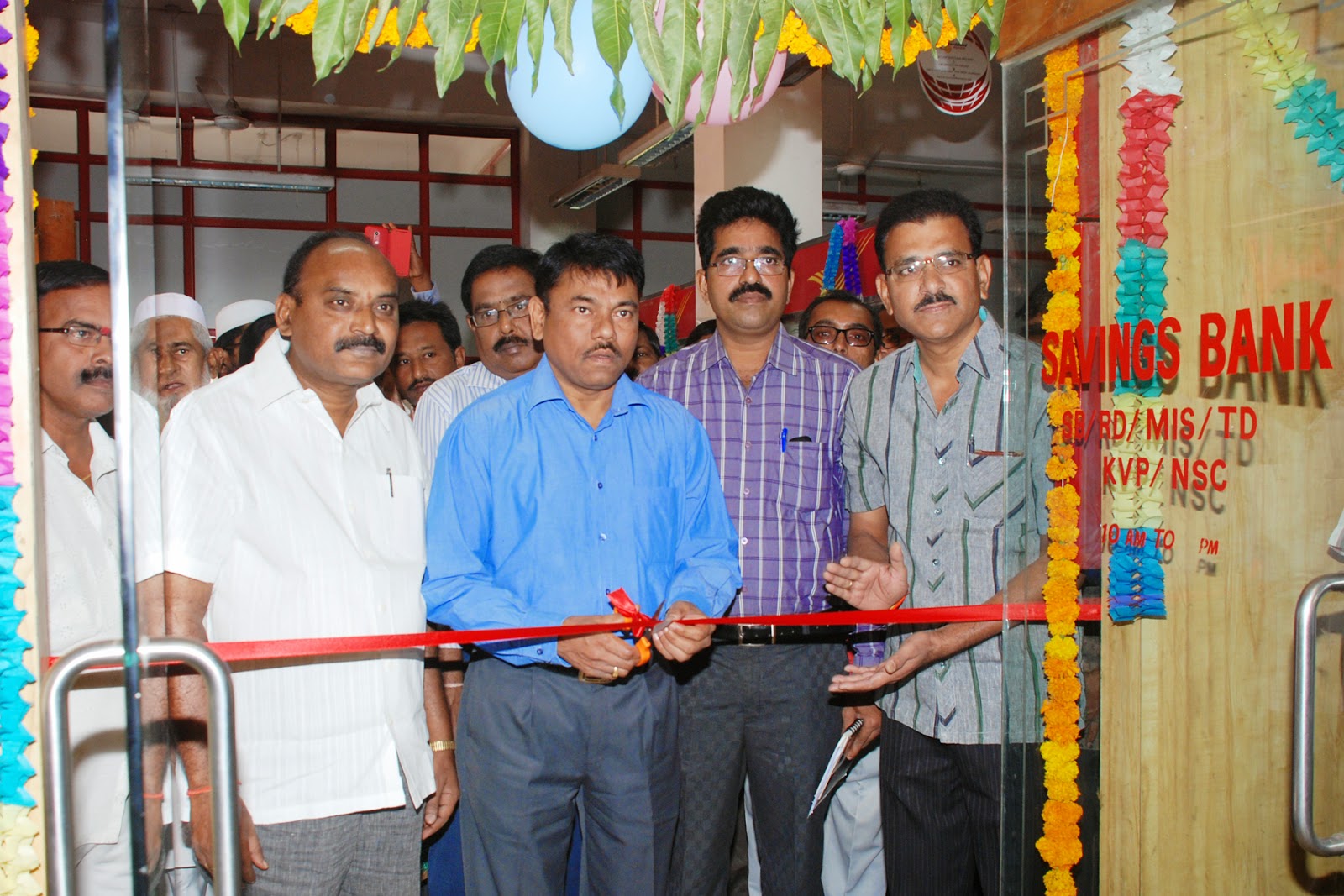 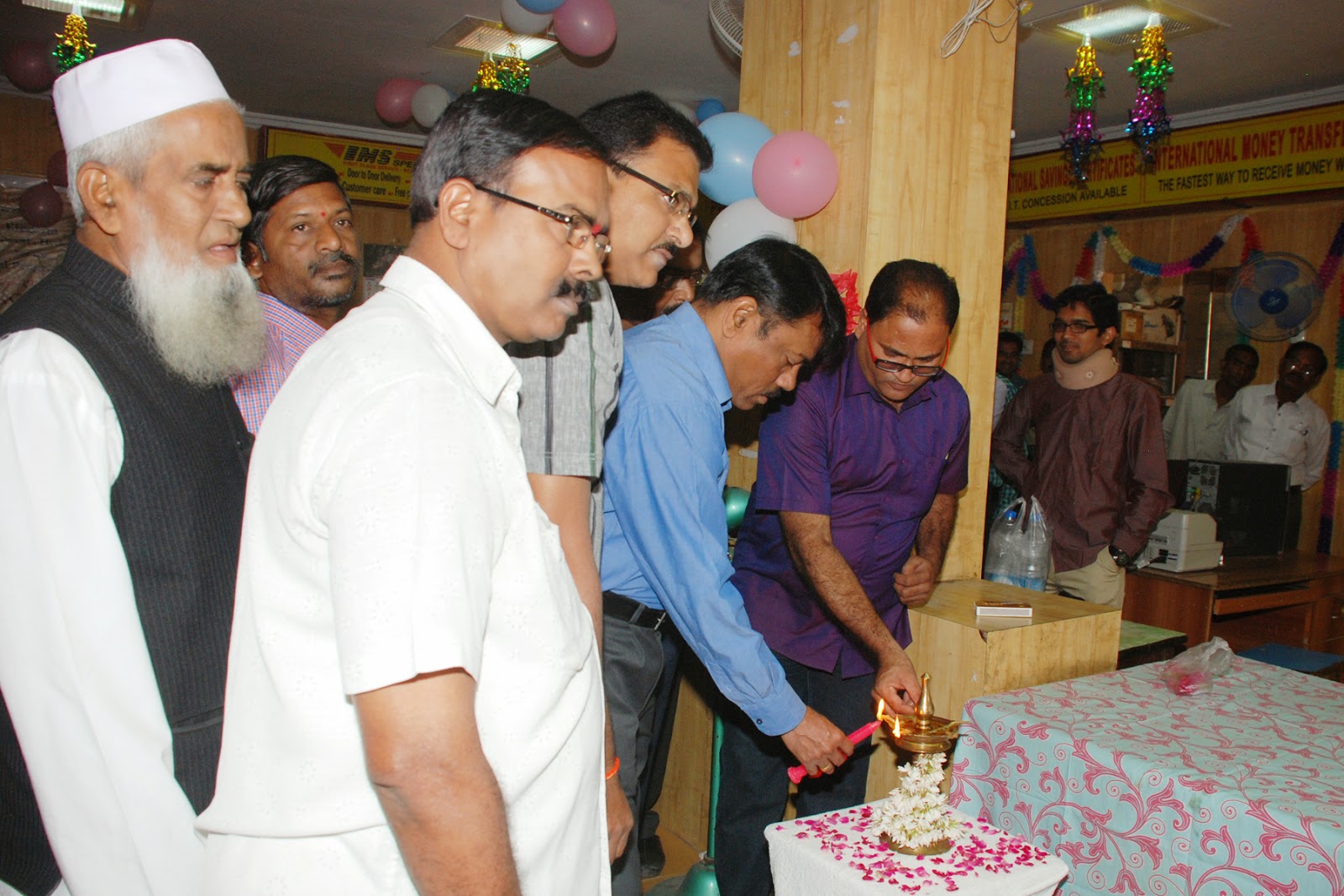 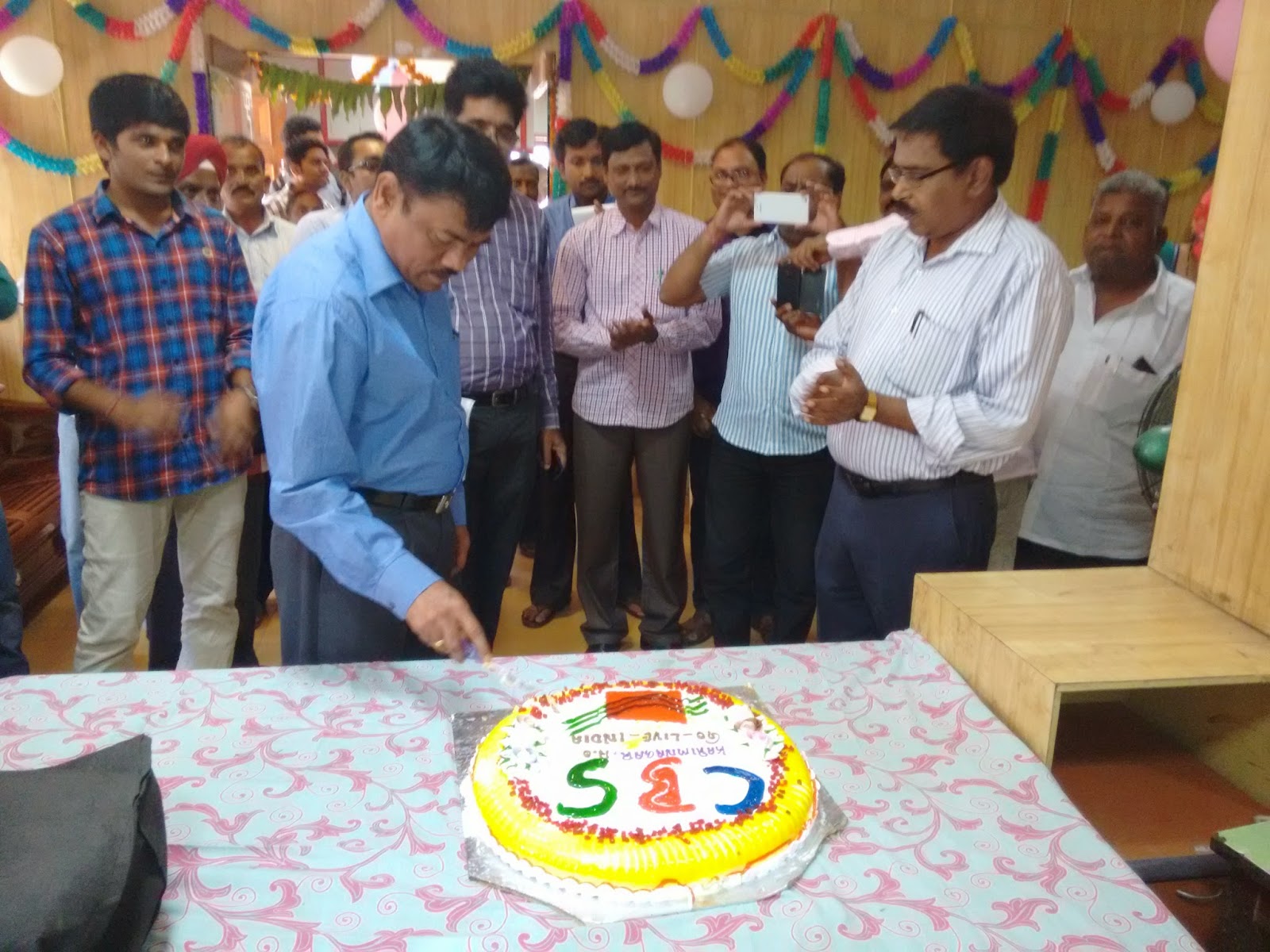 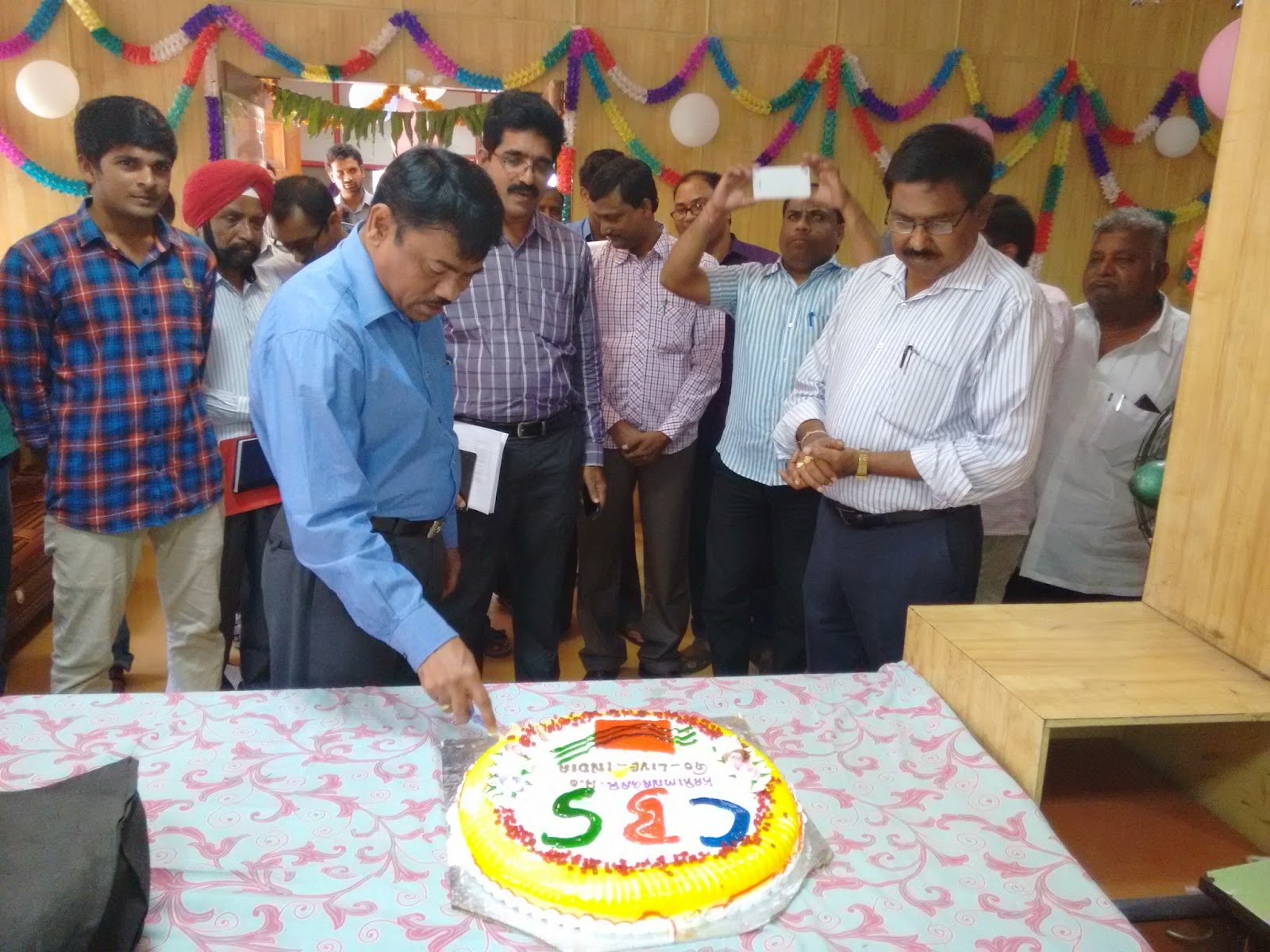 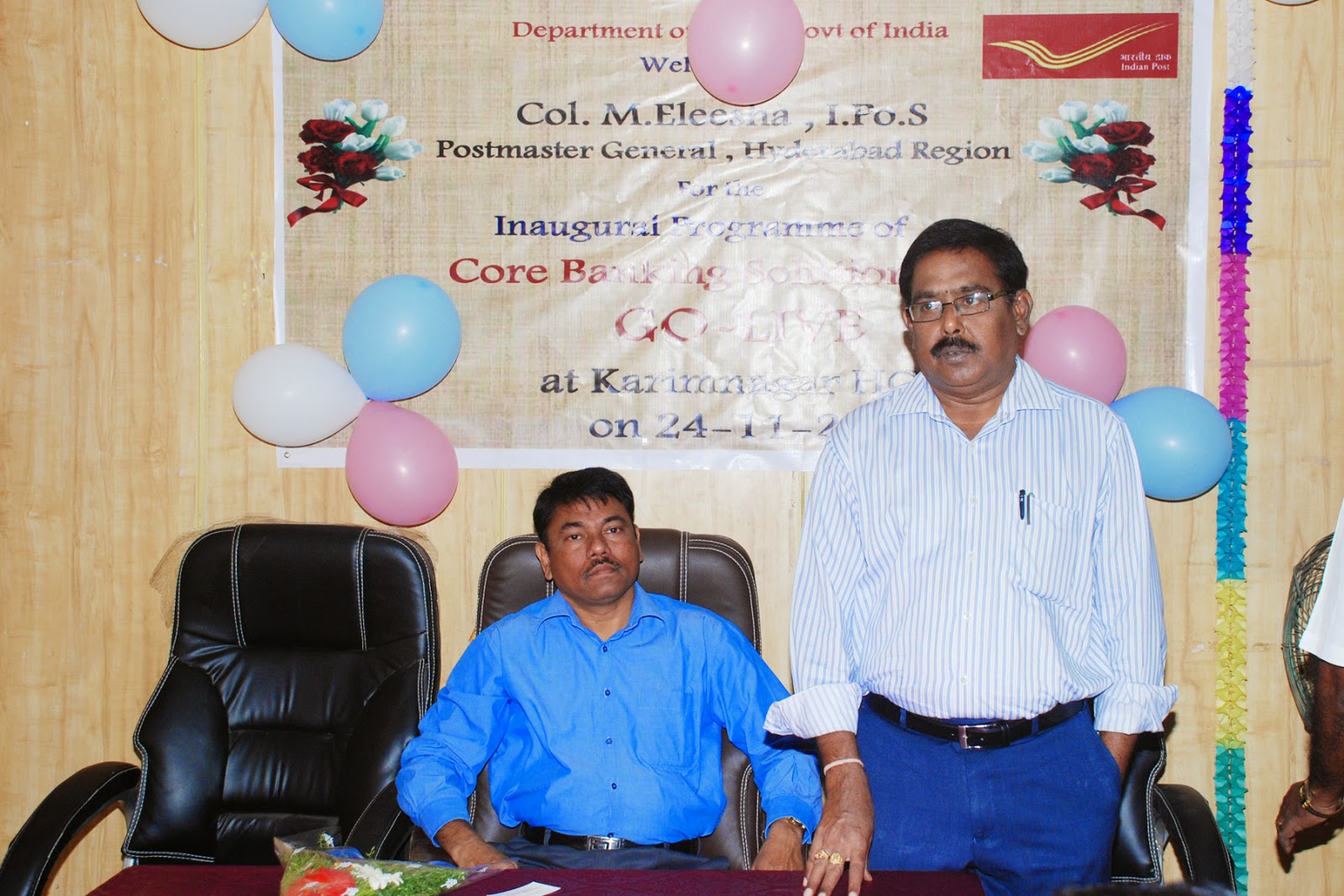 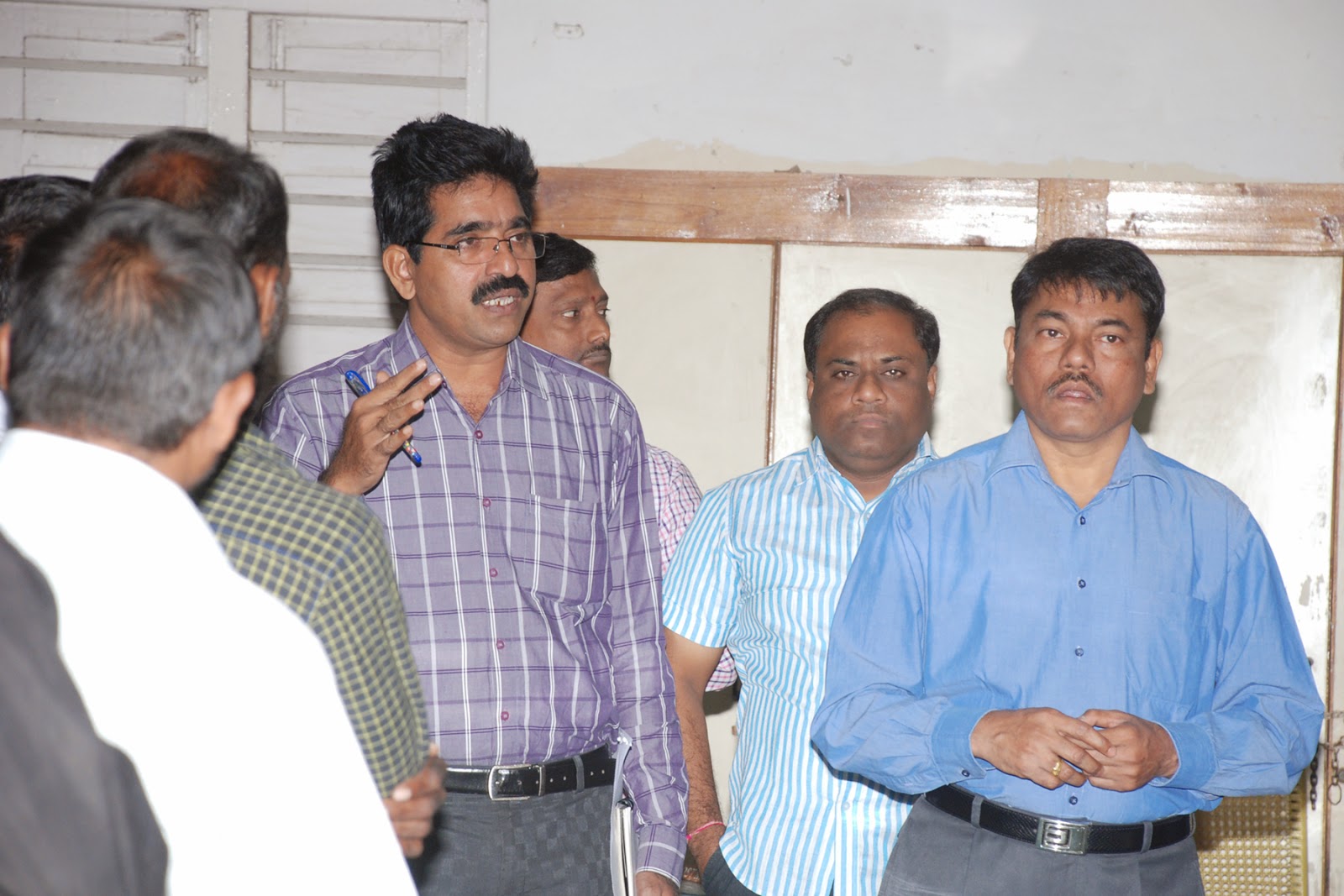 Posted by Praveen kumar at 3:40 AM No comments:

First in Awards and Titles

Posted by Praveen kumar at 11:44 PM No comments: