Over a decade, Indian market is flooded with fake currency. But in last couple of years, there seems to be an increase in the inflow of fake currency from neighboring countries and now currency notes are closer you than you think. Check your wallet, here are some tips on detecting fake Rs 500 and Rs 1000 notes.Double Click Images to Enlage

ON THE OBVERSE (FRONT)
1. See through registrationIn the Middle of the vertical band at the extreme left is the denominational numeral ("500" in Rs 500 and "1000" in Rs 1000) printed as a floral design. One half of this numeral is printed on the obverse and the other half in reverse in such a way that the two printed portions have a perfectly accurate back-to-back registration and the numeral appears as one when viewed against light. 2. Identification MarkA circle (Rs 500 note) and diamond (Rs 1000 note) with intaglio print, which can be felt by touch, helps visually impaired to identify the denomination.3. WatermarkA portrait of Mahatma Gandhi, multi-directional lines and an electrolyte mark showing the denominational numeral ("500" in Rs 500 note and "1000" in Rs 1000 note) appear in this section and can be viewed better when the note is held against light.4. Optically variable inkThe colour of the numeral in the centre {"500" in Rs 500 note and "1000" in Rs 1000 note) appears green when the note is held flat but changes to blue when it is held at an angle. 5. Intaglio PrintingA portrait of Mahatma Gandhi and the seal of Reserve Bank of India at the extreme right, the 'guarantee' and 'promise' clauses in the middle, the emblem of the Ashoka Pillar at the bottom left, the signature of the Governor of Reserve Bank of India below 'promise' clause and the identication mark for the visually impaired persons are all printed in intaglio and can be felt by touch.6. Micro-letteringThe letters "RBI" and the numeral "500" (in Rs 500 note) and "1000" (in Rs 1000 note) can be viewed with the help of magnifying glass in the area between the Mahatma Gandhi portrait and the vertical band at the right.7. Latent ImageThe vertical band above the seal of the Reserve Bank of India contains a latent image of the numeral "500" (in Rs 500 note) and "1000" (in Rs 1000 note) when the note is held horizontally at eye-level.8. Security ThreadA vertical, 3-mm-wide, security with the inscriptions ("भारत" and "RBI" in Rs 500 note and "भारत", "RBI" and "1000" in Rs 1000 note) changes colour from green to blue when viewed from different angles. It will glow yellow on the reverse (back) and the next text will glow yellow on the obverse (front) under ultraviolet light. On the reverse, the thread is visible as an unbroken line when the note is held up against light. 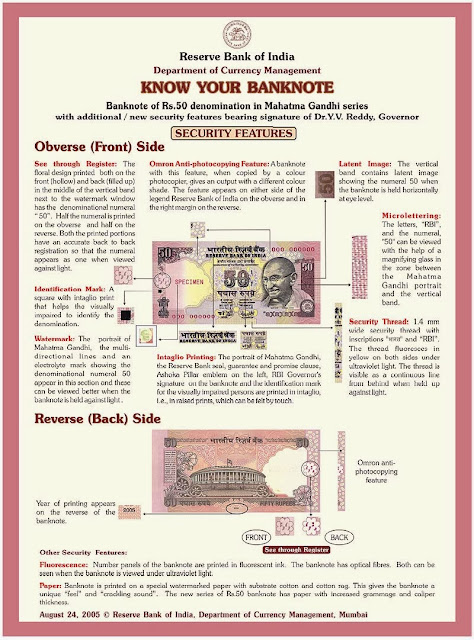 I have received some money. I found them as Fake/Forged Notes at later point of time. What should I do now ?
According to  Section 39 of the Criminal Procedure Code, every person, aware of the commission of or of the intention of any other person to commit certain offenses, including those relating to counterfeiting of currency, is required to immediately give information about such commission or intention to the nearest magistrate or police officer.
Is it possible to get exchange value for the Fake/ Forged Notes which I have received unknowingly?
Being a forged note,  it has no value. It is your mistake to take that note  without proper checking. So you will not get anything. So better avoid Fake/Forged Notes in your transactions.
Note : If you know that the money  you received contains some Fake/Notes at later stage and if you  try to use it in some other transactions, it is a serious offense. You are subject to questionable and if found guilty you can be punished.
I have found that there were some Fake/Forged Notes (say Rs.2500/-)with me which were given in some transaction. If I complaint  to police or the Bank will I be able to get the original notes (Rs.2500/-) in exchange with the Fake/Forged Notes ?
It is your mistake to take the money without checking it properly. So, you will not receive anything. It is your personal loss. Even though  you don’t receive anything, it is your duty  to provide information to the magistrate  or police officer and surrender those Fake Notes.
What should I do, if I  have received some Fake/Forged Notes in some transaction ?
It is your duty to immediately report  to the nearest magistrate or police officer.
So, is it possible for us to avoid Fake/Forged Notes ?
Yes,  it is possible only when you make a habit of checking them at the received time.
What happens if I try to deposit money [contain some Fake/Forged Notes] in the BANK  ?
The bank will impound the counterfeit note in the presence of the tenderer. The bank will also issue an acknowledgement to the tenderer. The receipt is authenticated by the cashier as well as by the tenderer. The acknowledgement is issued even in cases where the tenderer is unwilling to countersign it The bank will thereafter forward the impounded note to the local police authorities for further necessary action.

Posted by Praveen kumar at 8:44 AM