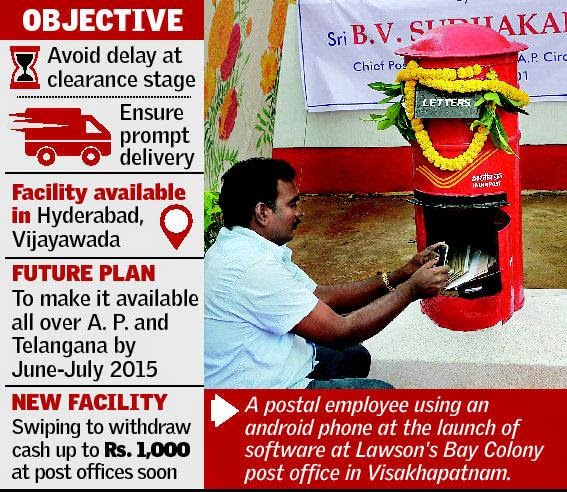 Android software for monitoring of letter box clearances is planned to be expanded all over Andhra Pradesh and Telangana by June-July 2015, Chief Post Master General B.V. Sudhakar has said.

He told reporters after launching the software ‘Nanyatha’ at Lawson’s Bay Post Office here on Tuesday that by January-end it would cover all the post offices in Visakhapatnam. The monitoring is already in place in Hyderabad and Vijayawada.

The software is aimed at cutting delay at clearance stage to address a frequent complaint over delay in delivery. The man clearing the post box will be given an android phone and the post-box lid will have a bar code. Using the device, he has to send the number of letters cleared to the AP Posts website which then scans the bar code to identify where it has been cleared, by whom and what time. Postal Department has plans to implement the software, developed in house, all over the country.

Mr. Sudhakar said the AP Circle has been leveraging technology to improve services and business deficit was brought down from Rs.465 crore in 2011-12 to Rs.387 crore in 2012-13 and to Rs.265 in 2013-14. “Contrary to popular perception, our business is increasing and the number of letters delivered has gone up from 19 lakh every day in the previous year to 22 lakh this year,” he said.
Mr. Sudhakar said soon the facility to withdraw cash, up to Rs.1,000, at post offices by swiping would be introduced. In the next phase, it would be extended to cashless transactions for booking speed post, registered post, parcels etc by using credit and debit cards. To improve its business, it has sought AP Government’s permission to sell non-judicial stamp papers. It would also explore the possibility of entering e-commerce by developing a website to market products.

He said that the Andhra Pradesh circle has decided to sell Tirumala Darshan  tickets of Rs 50 and Rs 300 denomination through all 95 head post offices in  Andhra Pradesh and Telangana region from January 5, 2015. The facility would be  extended all sub-post offices in the circle from February 2015, he said.

Posted by Praveen kumar at 9:41 PM