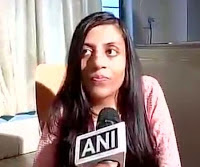 What would be particularly satisfying for Ira, who is af flicted by a spine-related disorder called Noonan syndrome, is that she thrice cracked the exams in 2010, 2011 and 2013, only to be denied a posting by the department of personnel and training (DoPT) in view of her "disability", which was evaluated at 62%.
Ira's appeal was finally upheld by the Central Administrative Tribunal in Febru ary 2014, but even then she got her posting in the lower-inladder Indian Revenue Service in December 2014. Union Public Service Commission topper Ira Singhal said her repeated attempts at clearing the civil services were "never to prove a point against being denied the posting due to my physical disability , but to prove my desire to work for the country".
Speaking to TOI from Hyderabad, Ira said, "I'd really like to work towards making our society more inclusive for persons with disability . Disability cannot be a handicap to our ability to perform, but our attitude to PWD can demoralize them.India's growth story lies in inclusiveness."
An MBA graduate from FMS, Delhi University , Ira chose civil services over multinational companies, where she had worked earlier at much higher perks and sala ry. "Working for the country is the biggest perk." The ranking order reads Ira Singhal, Renu Raj, Nidhi Gupta, Vandana Rao, followed by Suhar sha Bhagat, who sportingly claims that he is still the top , ranker among males. In all, 1,236 candidates have been recommended for appointment to IAS, IPS, IFS and other top services.
The successful candidates were congratulated by Prime Minister Narendra Modi."My best wishes as you begin the journey to serve the nation," he tweeted.
Minister of state for personnel Jitendra Singh is expected to felicitate the top 10 rank-holders on Monday .
Renu Raj, a doctor from Kottayam in Kerala, made it to the second position in her very first attempt. "I expected to be in the merit list but the second rank is a pleasant surprise," Renu, who is married, told TOI from Kottayam.
"Civil services have been childhood dream. I went by the advice of my family and got a professional degree (MBBS) before taking the exam. I started preparing a year ago and here I am," Renu said.
An elated Nidhi Gupta, the No 3 position holder and an IRS officer, said the news is yet to sink in.
"It feels great," she said, adding that although a software engineer who worked for an MNC before joining IRS, it was her desire to be in public service. "I want to work for better delivery of services and also be involved in policy making later in my career," she said.
Vandana Rao, with a computer engineering degree from Kurukshetra University, said it is feels "incredible" to be among the top five.
The 24-year-old, who was on her second attempt, said being a woman gave a certain perspective to delivery of public service. "I would like to work for the disadvantaged. Also, since I live in Delhi, I want to do something to make the city safer for women," she said.
Suharsha Bhagat of Sa mastipur in Bihar is the sole male candidate in the top five."The women have done great.But I am still the topper in the male category ," he said lightheartedly .
An alumni of IIT Mumbai, he too is an IRS officer. "The job profile of an IAS officer is more challenging than any profession you can begin with," he said.
Ira's parents said, "She has done world tour alone.She is no less in capability. Yet they DoPT deprived her of her career since 2010. Every time we went to DoPT, no senior official would meet us and only junior level officers of the rank of section officers would meet us who didn't speak properly.
"Now she is of the same rank, but I can assure you she will never say no to someone who would want to meet her. That's her personality and upbringing."

Posted by Praveen kumar at 1:24 AM