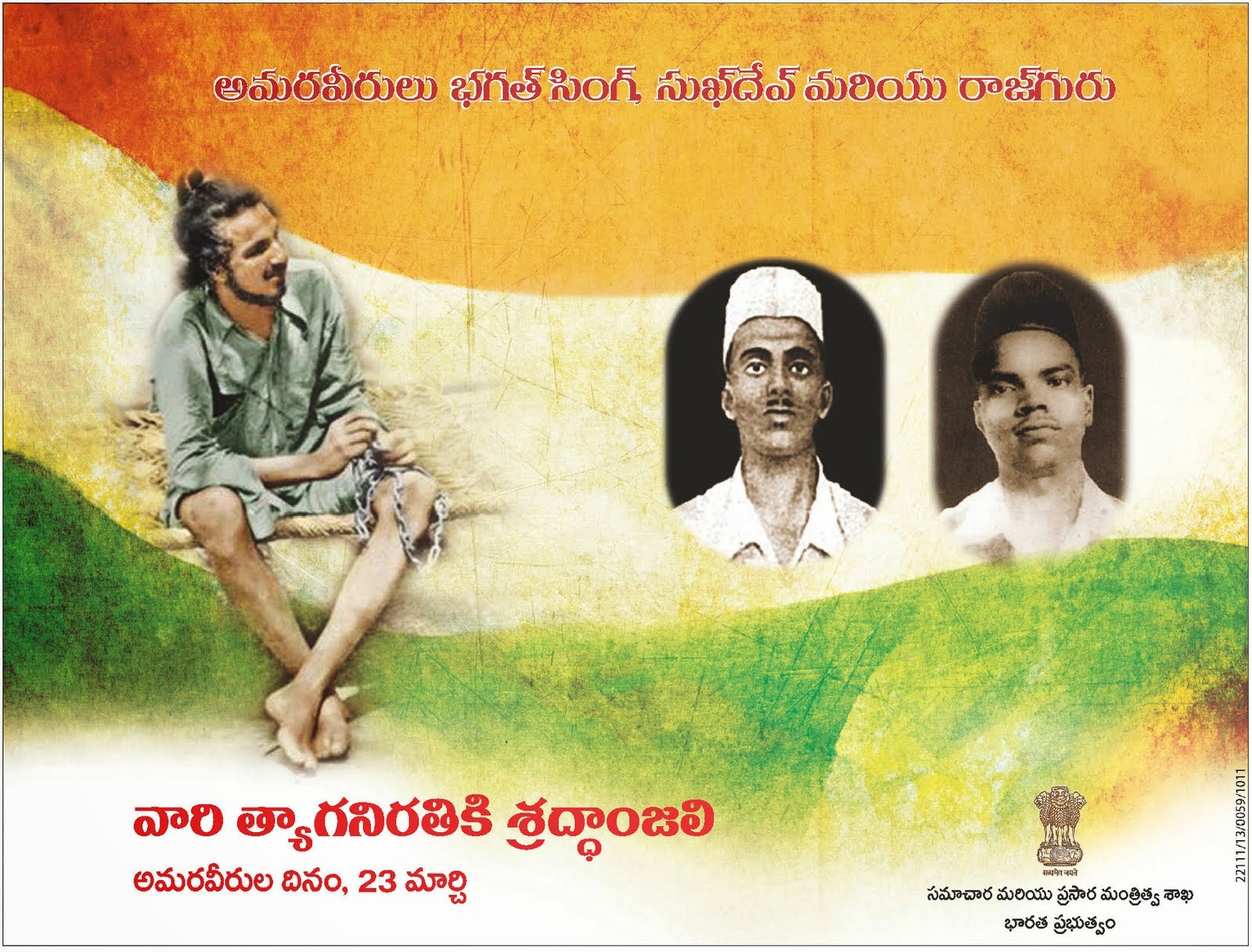 23 March is the Martyrs day or the 'Balidan Din' of Bhagat Singh, Sukhdev & Rajguru !

I Salute these great Heroes !


‘When power is misused, it translates into violence; but when it is used for achieving one's Righteous goals, it amounts to justice.’ This revolutionary ideology was stated by the great revolutionary Bhagat Singh. ‘Any sacrifice will be inadequate to accomplish the greatest aim of freeing the motherland’, was the inspiring outlook of Bhagat Singh, Sukhdev and Rajguru, his associates in the freedom fight. Today is the day when these three great revolutionaries laid down their lives in their effort to achieve their goal !

O People ! Do not be so ungrateful to Revolutionaries so as to forget them !

“The Government says that we should apply for mercy. But why should we do so? Are we thieves or dacoits or goondas? We are political prisoners in this war for freedom. The blood of complete freedom is circulating in every blood vessel of ours. Whatever bold action we did was for the sake of freedom alone ! We may not be worshippers of non-violence; our path may not be devoid of atrocities but is it not true that we are freedom-fighters? If the government has even a fraction of justice left within it, it has to treat us as political prisoners. We will never beg for mercy.

We do not intend to face this death sentence by saying ‘Do whatever you like but spare us from being hanged’. We dislike even climbing on the foot board meant for hanging. We are brave soldiers and true men ! Hence treat us like that by either shooting us with bullets or blast us with cannons. Who wants to face such a feeble sentence as hanging? We request you to respect this last wish of ours!”

Our politicians have seemingly dismissed memories of revolutionaries’ sacrifice completely. Their martyrdom appears to have no value for those with a political agenda.

O People, though the politicians have forgotten these revolutionaries, you at least do not be ungrateful to Revolutionaries by forgetting them !

As a freedom fighter, he was considered to be one of the most famous revolutionaries of the Bharatiya Independence movement. For this reason, he is often referred to as Martyr Bhagat Singh. At such a young age, if anyone was smiling just before being hanged to death, it was Martyr Bhagat Singh. His uncle, Sardar Ajit Singh as well as his father, were both great freedom fighters, so Bhagat Singh grew up in a patriotic atmosphere.

At an early age, Bhagat Singh started dreaming of uprooting the British Empire. Never afraid of fighting during his childhood, he thought of 'growing guns in the fields', so that he could fight the British. The Ghadar Movement left a deep imprint on his mind. Kartar Singh Sarabha, hanged at the age of 19, became his hero. The massacre at Jallianwala Bagh on 13th April, 1919 drove him to Amritsar, where he kissed the earth sanctified by the martyrs' blood and brought back home a little of the soaked soil. At the age of 16, he used to wonder why so many Bharatiyas could not drive away a fistful of invaders.

In search of revolutionary groups and ideas, he met Sukhdev and Rajguru. Bhagat Singh, along with the help of Chandrashekhar Azad, formed the Hindustan Socialist Republican Army (HSRA). The aim of this Bharatiya revolutionary movement was now defined as not only to make Bharat independent, but also to create a socialist Bharat.

A brutal attack by the police on veteran freedom fighter Lala Lajpat Rai at an anti-British procession caused his death on 17th November 1928, in Lahore. Bhagat Singh was determined to avenge Lajpat Rai's death by shooting the British official responsible for the killing, Deputy Inspector General Scott. However he shot down Assistant Superintendent Saunders instead, mistaking him for Scott. Then he made a dramatic escape from Lahore to Calcutta and from there to Agra, where he established a bomb factory.

The British Government responded to the act by imposing severe measures like the Trades Disputes Bill. It was to protest against the passing of the Bill that he threw bombs in the Central Assembly Hall (now our Loksabha) while the Assembly was in session. The bombs did not hurt anyone, but the noise they made was loud enough to wake up an enslaved Nation from a long sleep.

After throwing the bombs, Bhagat Singh and his friend deliberately courted arrest by refusing to run away from the scene. During his trial, Bhagat Singh refused to employ any Defence counsel.

Despite great popular pressure and numerous appeals by political leaders of Bharat, Bhagat Singh, Sukhdev and Rajguru were accorded the death sentence and hanged in the early hours of 23rd March 1931. Their bodies were cremated on the bank of the Sutlej in Ferozepur. Bhagat Singh was just 23 years old at that time. Old timers say that in many places, not a single hearth fire burned that day.

The last paragraph of the leaflet that he distributed (and wrote) in the Assembly Hall said: "We are sorry that we who attach such great sanctity to human life, we who dream of a very glorious future when man will be enjoying perfect peace and full liberty, have been forced to shed human blood. But sacrifice of individuals at the altar of the Revolution will bring freedom to all, rendering exploitation of man by man impossible. Inquilab Zindabad (Long live the Revolution)."

There was a time when the very mention of the name of the young revolutionary stirred the passions of most Bharatiyas.

We pay obeisance to this invaluable son of Bharat, who is still an inspiration to millions of Bharatiyas.

He was an active member of the HSRA, being one of its senior most leaders. He is known to have started study circles at the National College (Lahore), in order to delve into Bharat's past as well as to scrutinise the finer aspects of the world’s revolutionary literature. Along with Bhagat Singh and others he started the ‘Naujawan Bharat Sabha’ at Lahore. The main aims of this organisation were to activate the youth for the freedom struggle, inculcate a rational scientific attitude, fight communalism and end the practice of untouchability.

His letter to Mahatma Gandhi written just prior to his hanging, protesting against the latter's disapproval of revolutionary tactics, throws light on the disparities between the two major schools of thought among Bharatiya freedom fighters at that time.


Shivram Hari Rajguru (1908 - 23rd March 1931) was born in an average middle-class Hindu Brahmin family at Khed in Pune District in 1908. He came to Varanasi at a very early age where he learnt Sanskrit and read the Hindu religious scriptures. He had a great admiration for Shivaji and his guerrilla tactics.

At Varanasi, he came in contact with revolutionaries. He joined the movement and became an active member of the Hindustan Socialist Republican Army (HSRA). Rajguru had a fearless spirit and indomitable courage. The only object of his adoration and worship was his motherland, for whose liberation, he considered no sacrifice too great. He was a close associate of Chandrashekhar Azad and Bhagat Singh and his field of activity was UP and Punjab, with Kanpur, Agra and Lahore as his headquarters.

Rajguru was a good shot and was regarded as the gunman of the party. He took part in various activities of the revolutionary movement, the most important being Saunder's murder. Chandrashekhar Azad, Shivram Rajguru, Bhagat Singh and Jai Gopal were deputed for the job. On 17th December 1928, while Saunders came out of his office and started his motor-cycle, he was shot dead in front of the police headquarters at Lahore by Rajguru.

At the time of his martyrdom, Rajguru was hardly 23 years of age.

Posted by Praveen kumar at 4:23 AM