India is poor in happiness also ! 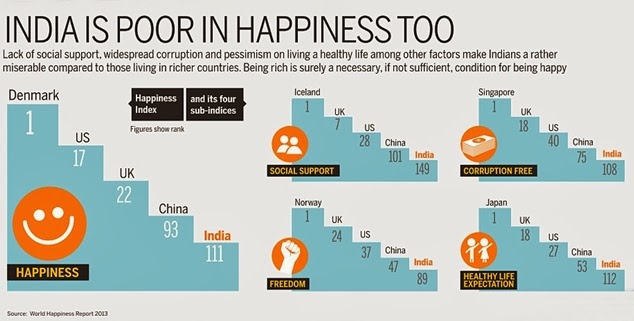 Last week Columbia University released the results of the 2013 World Happiness Report, sponsored by the United Nations, which ranks the happiness of people in 156 countries.
They considered such factors as wealth, health, freedom of choices, government effectiveness and corruption, and overall generosity. While some of the results are no-brainers, others are more surprising. Here’s a snapshot of our planet:
10. Africa is miserable. Nearly all of sub-Saharan African nations rank near the bottom of the list, with Togo (156) being the saddest place on Earth.
9. War is bad, but civil war is worse. Syria (148) is the saddest non-African nation, well behind Iraq (105) and even Afghanistan (143).
8. Poor sucks no matter where. Bulgaria is in the European Union, but ranks 144th because of poverty and corruption. 5% of Bulgarians are planning to emigrate elsewhere.
7. Biking by choice, or by necessity? Many of the happiest nations on earth have high bicycle usage, though they could afford to drive BMW’s. Conversely, China (93) has the highest bicycle usage, but they aren’t too happy about it.
6. For what it’s worth, India (111) will be pissed to learn that Pakistan (81) is somewhat happier than they are.
5. For what it’s worth, Israel (11) will be ecstatic to learn they are happier than the UAE (14), Qatar (27), Kuwait (32), Saudi Arabia (33), Jordan (74), Lebanon (97), Palestine (113), and Egypt (130).
4. Rich doesn’t necessarily mean happy: The United States sits at 17, while its much maligned southern neighbor Mexico came in at 16. Researchers point to stress factors among Americans that are much higher than in easier-going Mexico. Further down the list for similar reasons are the UK (22), France (25), and Germany (26).
3. Warm isn’t wonderful. Of the top 10 happiest nations, only one – Australia (10) – is a warm-weather country. Well-known destinations like Mauritius (67) and Jamaica (75) are nice places to visit, but you probably don’t want to live there.
2. Bleak is beautiful. The happiest countries on earth are Iceland (9), Austria (8), Finland (7), Canada (6), Sweden (5), Netherlands (4), Switzerland (3), Norway (2), and…
1. The winner: Denmark (1) ! Fairly wealthy, constitutional monarchy, large and efficient government providing a high degree of support, nationalized healthcare, cold weather, Hans Christian Andersen and wonderful, wonderful Copenhagen.
Posted by Praveen kumar at 11:48 PM