Our Great Nation Salutes you Sachin with Million Loves & Respects

Congrats our master & proud of you always !!! 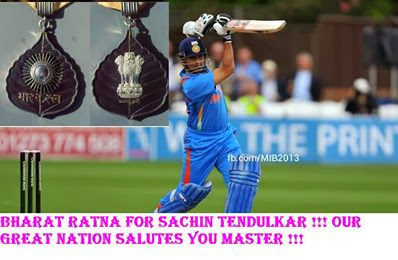 Just hours after the legendary batsman bid goodbye to cricket, it was decided that Sachin Tendulkar would be awarded with the highest civilian honour – Bharat Ratna. With this, Tendulkar has become the first sportsperson to receive the biggest honour possible for any Indian.
"Sachin Tendulkar is undoubtedly an outstanding cricketer - a living legend who has inspired millions across the globe," Prime Minister Manmohan Singh's office said in a statement.

"During the last 24 years, since the young age of 16 years, Tendulkar has played cricket across the world and won laurels for our country.

"He has been a true ambassador of India in the world of sports. His achievements in cricket are unparalleled, the records set by him unmatched, and the spirit of sportsmanship displayed by him exemplary.

"That he has been honoured with several awards is testimony to his extraordinary brilliance as a sportsman." 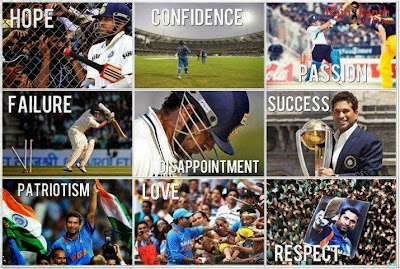 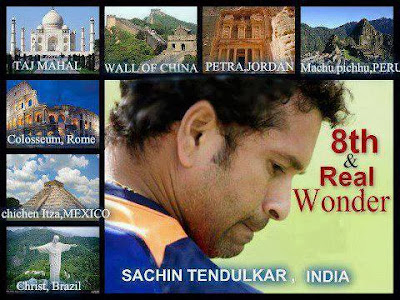 Apart from Tendulkar, eminent scientist CNR Rao, the man behind Indian's Mars Mission, has also been conferred the Bharat Ratna.

The issue of awarding Sachin Tendulkar with Bharat Ratna has been a topic of discussion for over two years. Apart from popular cricketers, most of the political parties had also backed the call for conferring Tendulkar the highest civilian honour.

The 40-year-old icon, who called time on his glittering international career on Saturday, was chosen for the top award soon after his farewell Test against the West Indies ended in Mumbai.
A brief statement issued by Rashtrapati Bhavan spokesperson Venu Rajamony said the President has awarded the Bharat Ratna to Tendulkar, who retired from the International cricket today.
The Bharat Ratna is being conferred after a gap of years with classical vocalist Pandit Bhimsen Joshi being the last recipient.
Posted by Praveen kumar at 5:56 AM