In order to encourage more young voters to take part in the political process, Government of India has decided to celebrate January 25 every year as 'National Voters' Day'. It is started from January 25th 2011. 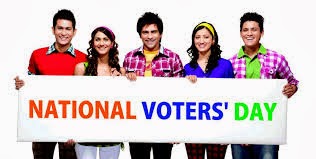 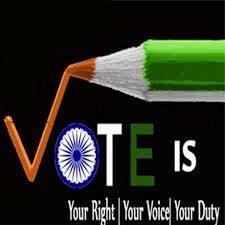 Every year National Voters’ Day (NVD) is observed on 25th January, a practice that was initiated in 2011 to commemorate the foundation day of the Election Commission of India and also to enhance the participation of the voters, especially the youth, in the democratic process. The Election Commission’s objective behind National Voters’ Day is to increase enrolment of voters, especially of the newly eligible ones, by using this occasion to make universal adult suffrage a complete reality, and thereby enhance the quality of Indian democracy. The day is also utilized to spread awareness among voters regarding effective participation in the electoral process.

25th January has already become a historic moment in India’s electoral democracy. As per the reports of Voters’ registration, approximately 3.83 crore new registrations have been done throughout the country, out of which 1.11 crore are in the age group 18-19 as on January 1, 2012, which was the qualifying date. Last year 52 lakh young voters, who had attained the age of 18 years, had been enrolled which marked the biggest empowerment of youth on a single day anywhere in the world. This year, the number has more than doubled.

During the last 60 years, the Election Commission of India has conducted 15 General Elections to the Lok Sabha (House of the People) and 331 general elections to State Legislative Assemblies, thus facilitating peaceful, orderly and democratic transfer of power. In its delivery of free, fair and transparent polls, the Commission considers it sacred to stay uncompromising and to fiercely guard its credibility, besides affirming that the vote of every eligible Indian counts.

The Commission’s journey has also witnessed a change in both quality and scale of its operations.  In 1962, the voting process moved from the balloting system to marking system and then, from 2004 onwards, to the present system based on Electronic Voting Machines. Multi-member constituencies have given way to single member constituencies. Printed electoral rolls have now been substituted by computerized photo-electoral rolls. The Elector’s Photo Identity Cards (EPICs), by now a cherished possession of all citizens, were issued to over 582 million voters in time for General Election 2009. Elections to the 15th Lok Sabha held in April-May 2009 have been described as the biggest management event in the world. It involved 714 million voters, 835,000 polling stations, 1.2 million Electronic Voting Machines and 11 million polling personnel. The management of elections in India has continually been evolving in order to match with the colossal proportions and ever-increasing complexity of the task.

Considering this mammoth election management exercise in the world, the Election Commission is concerned about greater participation of citizens in the country’s electoral process as against the present level of apathy and non-involvement among certain sections, especially the youth.  In particular, the Commission has found that the new voters (18+) are missing from the electoral roll in a big way year after year.  In certain cases, the level of their enrolment is as low as 20 to 25%.

In order to effectively deal with this problem, the Commission has decided to take up a vigorous exercise to identify all the eligible voters attaining the age of 18 years as on 1st of January every year, in each of the 8.5 lakh polling station areas of the country. Besides registration, these newly enrolled voters are also administered a pledge that goes as follows: “We, the citizens of India, having abiding faith in democracy, hereby pledge to uphold the democratic traditions of our country and the dignity of free, fair and peaceful elections, and to vote in every election fearlessly and without being influenced by considerations of religion, race, caste, community, language or any inducement”. Moreover, the newly enrolled voters are given a badge with the slogan “Proud to be a voter – Ready to vote” during the felicitation ceremony along with their EPIC. This process is expected to give the youth a sense of citizenship, empowerment, pride and participation and also inspire them to exercise their franchise, when the occasion comes. The Commission is also running special campaigns to involve as many women as possible in the democratic mechanism.

In keeping with the objectives of the National Voters’ Day, a countrywide special campaign has been taken up to reach out to the newly eligible (18+) electors, and to register them in the electoral roll. The Chief Electoral Officers (CEO’s) of all states and UT’s have been instructed by the commission from time to time, to enroll every youth who has attained the age of 18. The Commission has specially been impressing upon the fact that as many women voters as possible need to be enrolled. Without the participation of women, a significant proportion of our country’s population remains on the fringe of democracy.

In order to motivate the youth to become an agent of change through their vote, the Election Commission has been running a comprehensive Systematic Voters’ Education and Electoral Participation (SVEEP) campaign. The messages from the youth icons, namely, Dr. A.P.J. Abdul Kalam, Former President of India, and Shri M.S. Dhoni, Captain, Indian Cricket Team, have been recorded asking the voters to be registered. Messages from the regional icons are also being used to ask the youth to register and vote.

The occasion has been surely turning out to be momentous thereby bringing home the point that democracy is the government of the people, for the people and by the people. All the major issues relating to elections such as corruption, casteism, communalism, and the like ultimately crop up because of the lack of participation of ordinary populace in elections. National Voters’ Day, in essence, is aimed at reaching out to the people, learning the reasons for their disillusionment from the popular process and helping them in realizing the fact that democracy is not complete until everyone is part of it. Certainly the message from the Commission is loud and clear: it will not relent until every single eligible voter is able to- and is willing to- vote. (PIB Feature). 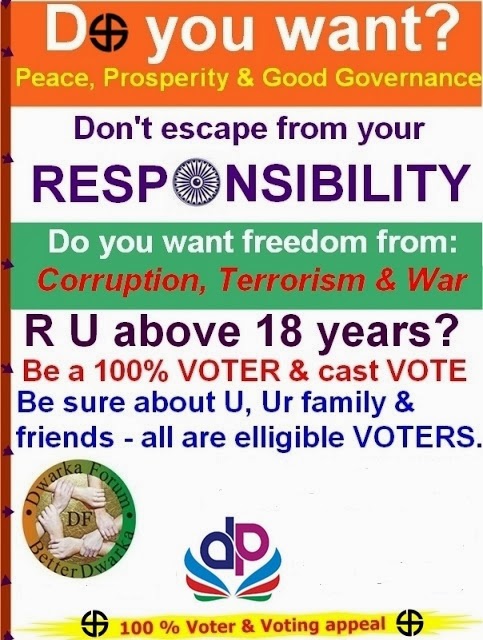