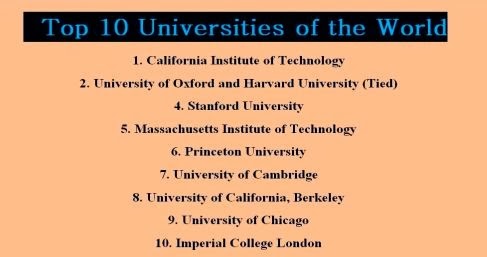 Universities also provoke the economic growth of its countries. For an example a recent study regulated that universities assisted nearly 60 billion pounds to the economy of the United Kingdom.

10. Imperial College London: In 2000 Imperial College merged with the Kennedy Institute of Rheumatology and the University of London's agricultural college in Wye. After that in 2007 it became an independent college. Now the university is mainly known as schools of medicine, education, natural science and business.

This year it fell two spots from previous year’s ranking no.8 to no. 10 and University of California, Berkeley took the spot.

9. University of Chicago: University of Chicago was in no.10 spot last year; it raised one spot this year. 87 Nobel Prize winners belong to this university. The university has 12 research institutes and 113 research centers on its campus. It’s also famous for construction of the world’s first self-sustaining nuclear reactor beneath its football ground. The stature of the campus is 215- acre.

The university is home to 18,300 students in present.

It has 500 acre campus and the university is a home to 5000 undergraduates and 2,500 postgraduates.

5. Massachusetts Institute of Technology: We all heard the name of MIT somewhere, it’s a very famous college all around the world, and the university retained its no. 5 ranking from last year. The motto of the university is ‘Mens et manus’ ("Mind and Hand").

It has produced more than 70 Nobel laureates in 150 years, 8 of them are the member of current faculty. It has scored 93% (overall).there are More than 200 life science and technology-related companies already have offices in MIT's hometown.

4. Stanford University: Stanford is the main rival of Harvard University on US ranking, Stanford ranked first in this year’s Forbes ranking of American colleges, but on global list it places at no. 4. Its alumni created corporate giants including Hewlett-Packard and Google.

Stanford University also the third richest university of the world and the number of students in this college is 7,000 undergraduate and around 4,000 graduate students.

University of Oxford is the top UK institution in this list and it’s tied for the 2nd spot again. Last year oxford shared honor with Stanford University. It is the first university in the English speaking-world and founded nine centuries ago. The university has produced more than 20 British prime ministers and at least 30 other world leaders. And it is the world’s third oldest university.

Harvard University, it’s the oldest university in the United States, the university jumped two spot this year no. 4 to no. 2. The university founded in 1636 and it named after John Harvard its first benefactor.

It has largest financial endowment in the world and brags more than 40 Nobel laureates. It has 210-acre main campus and 10 faculties, 23 satellites house and the Radcliffe Institute for Advanced Study.

California Institute of Technology was founded in 1891 and renamed in 1921. It was known as Throop University before 1921. The school has also conducted NASA's Jet Propulsion laboratory since 1958. It has 3:1 student-to-faculty ratio. Overall score of the university is 95.5%. It brags 31 Nobel laureates among its past and current faculty and alumni.

So, it seems that US is also dominating the world in the field of knowledge. Switzerland gained the top-ranked school outside of the US or UK at number 14. University of Tokyo gets the highest Asian school at number 23. India and Russia still struggling, it has no institutions in the top 100 for the second year in a row.

So these are the top 10 universities in the world in 2013-14 which are currently ruling the globe of knowledge with great expertise.

Source: - Times Higher Education
Posted by Praveen kumar at 7:53 AM